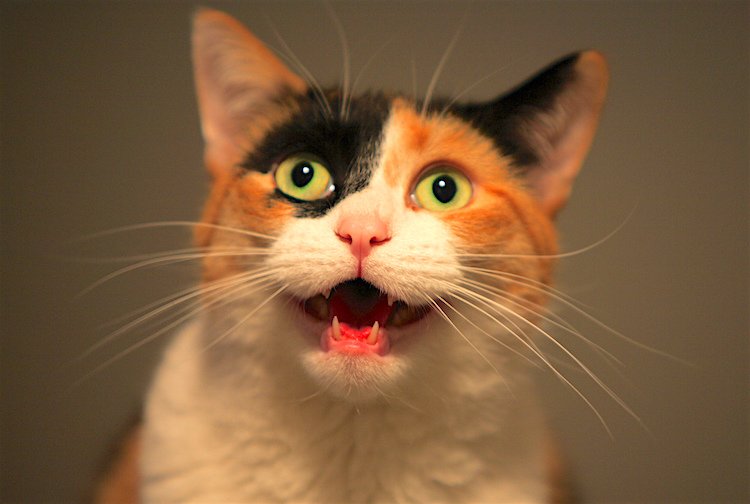 Did you know that cats are capable of making more than 100 sounds?

Did you know that every year veterinary behaviorists discover even more sounds as they attempt to decipher exactly what those sounds and combinations of sounds mean? Curious about the most common sounds that kitties make? Consider the following:

Short mew: Not only can it serve as a feline’s greeting, but it’s also similar to a person’s asking a question. Examples: When you hear a short mew, your kitty may be asking, “Are you concerned about me?” or “Could you please pick me up to get me away from the dog?”

Rapid-fire meow: Often, when a cat’s excited or craves attention, she’ll emit this rapid-fire meow. While its most common meaning is “I’m hungry, paw-lease feed me now!”, it may also be a sign of concern, discomfort or distress. Chirping or chattering: As part of a cat’s natural hunting instinct, she’ll usually emit this familiar sound when she’s sitting in front of a window staring at the birds, chipmunks or squirrels outside. The reasons: she’s excited because she sees them as potential prey or she’s frustrated because she can’t get to them.

Long plaintive meows: These usually indicate worry, annoyance or an objection on the part of your cat. Tending to be more repetitive in nature, they mean that your kitty REALLY wants something specific – from waking you up in the morning because she’s hungry to demanding an immediate release from the room she’s in.

Growling: Announcing the potential start of a fight, it’s a cat-to-cat sound that literally means, “back off.” Consider this as a warning sign that your kitty is extremely agitated and requires some space.

Purring: While people generally think that a purring cat signifies contentment and happiness, in some instances, it can be a sign that your cat’s uncomfortable or in pain and is purring as a way to soothe herself.

Hissing: Unprovoked cats will often hiss at other animals and people when they’re either threatened, frightened or in pain.

Trilling: While most cat sounds are made with their mouths open, trilling is one sound that cats make with their mouths closed. Not only is trilling used by mother cats to get their kittens to pay attention to them or follow them, veterinary behaviorists see it as a positive, happy and friendly greeting. Yowling: Outdoor, intact females in heat will often emit this sound in a seductive attempt to lure tomcats their way. Yowling can also signify that a major cat fight is about to start or that a particular cat is in great pain.