How DO Falling Felines Land On Their Feet? 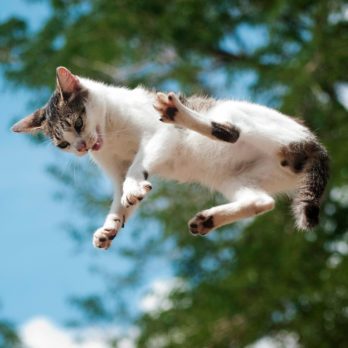 Have you ever wondered how many of their legendary nine lives cats use up when they fall from extraordinary heights?

Have you ever wondered how they, more often than not, manage to land safely on their feet?

known as the righting reflex, this innate ability to reorient their bodies during a fall has been observed in kittens as young as the age of three weeks, and this gravity-defying skill is fully developed by the time they’re seven weeks old. Historically, cats falling from greater heights (five stories and more) suffer less severe injuries than those falling from only a few stories. This longer free fall allows them more time to right themselves and position their bodies correctly so that by the time they reach the ground, their feet will touch down first. Visualize a kitty falling in slow motion. She starts shifting her balance the instant her flight begins. First, her body determines which side should be up, guided by her eyes and ears. A cat’s inner ear’s vestibular system acts as her balance and orientation compass, alerting her to where her body is in relation to the ground. She then begins rotating her head until she’s facing the proper way and can see precisely where she’s going to land.

Secondly, her spine follows as she arches her back. Possessing a unique skeletal structure, a cat’s spine has no collarbone and an unusually flexible backbone with 30 vertebrae – unlike humans who have 24 – and it’s the suppleness of this backbone that enables her to correct her course during her fall. And since a cat has a low body-volume-to-weight ratio, much like a flying squirrel, she’s able to slow her velocity when falling by expanding her body size which, in turn, creates air resistance. Thirdly, she positions her front feet under her, followed by her hind legs, with her front paws placed close to her face to protect it from the impact of landing on the ground. More like a parachute and less like an airplane, she relaxes her falling body and spreads it out in preparation for landing, ensuring her leg joints bear the impact of her weight.

Several years ago, a cat who fell a staggering 32 stories from a high-rise apartment to land on the concrete sidewalk was released from a veterinary clinic after 48 hours with only a chipped tooth and a minor lung puncture!