The Downside of “Scruffing” 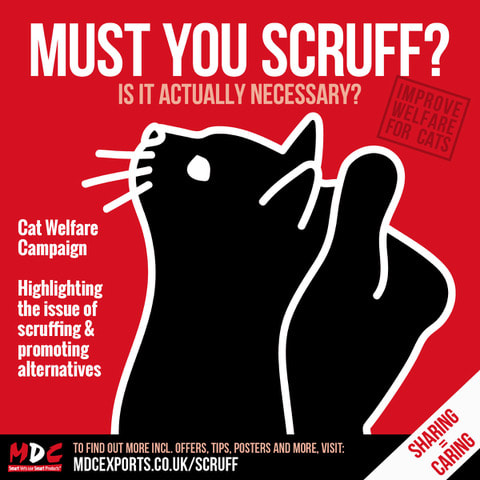 Are you familiar with the term “scruffing” as it relates to our feline friends? Long considered the most effective way of restraining cats, it involves taking the looser skin on the back of their necks (the scruff) in one hand and holding it – like a handle. This effectively immobilizes most kitties allowing their owners to perform such tasks as nail trimming or administering medications without dealing with struggling, squirming pets.

Some owners still believe that scruffing is a “natural” way in which cats reprimand each other. Nothing could be farther from the truth. While mother cats carry their newborn and young kittens by the scruff to move them from one location to another – usually for reasons of safety – it’s never used as a form of inter-feline discipline.

According to the experts, scruffing as an accepted practice is not only outdated, it’s hurtful, harmful and potentially traumatic. The result? Rather than pacifying some cats, it can panic others, causing them to swat, scratch or bite in a frantic effort to free themselves. Continued scruffing only heightens their negative association with the experience and serves to make their reactions to it progressively worse. While often used by pet parents as a shortcut, scruffing, in the long run, may have serious health implications for their terrified kitties, making essential future visits to the vet all but impossible.

The solution? Other, more humane ways to safely restrain a cat when the situation calls for it. In fact, a great deal of work has been done in the area of “low-stress” and “fear-free” handling of cats. Permitting them the use of at least one leg and providing distractions such as high value treats or especially tasty foods coupled with a more measured approach to restraining them is key to earning their trust and winning their compliance. Enter the towel. Always close at hand, a towel (or a small blanket) is one of the most popular choices for subduing without scaring your own purr-ecious puss. One suggested option for its use is having your kitty hide her head under it like a petite, protective tent, and the second is gently wrapping her entire body inside of it. Akin to swaddling an infant, containing her on all sides and providing her with a feeling of safety, ensure that the towel provides a steady, even pressure but isn’t so tight that it impairs her ability to breathe. humanely restrained but is obviously enjoying it! There are products on the market that accomplish the task just as easily and effectively such as ThunderShirts for cats, available in various models and styles.

And so, if you MUST restrain your cat, patience and gentleness are essential. Forcing her to do something she doesn’t want to do produces only negative results. Even if you’re using the “burrito” method and you notice her resistance beginning to escalate, unwrap her immediately, allow her to relax, and try again once she’s completely calm and settled. For routine procedures such as nail trims and doses of medicine, waiting for an hour or more can mean the difference between failure and success.

So, paw-lease, for your kitty’s sake, put all thoughts of scruffing behind you.