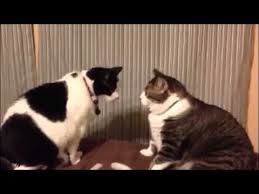 How adept are you at reading your kitty’s signals? Let’s start with her eyes. In a standoff between two opposing cats, the defender’s pupils will be dilated to widen her peripheral vision, giving her an advantage in anticipating an attack. On the other hand, the aggressor’s pupils will narrow to allow her better depth perception — an advantage in judging where to attack. Aside from indicating fear, a cat’s pupils will also dilate in dim surroundings to allow as much light as possible to enter her eyes. Perhaps the most wonderful signal, most often missed by even the most observant cat owner, is the sweetly seductive slow eye blink. Slow eye blinking is a very powerful and reassuring signal commonly used between cats when they’re sitting or lying in a hunched-up, sphinx-like position. It’s also a technique used by animal behaviorists to relax both house cats and feral cats by allowing them to interpret this human’s signal as: “I’m not a threat to you.” And for cat-crazy cat owners, it’s the ideal way to say, “I love you”, to their own favorite feline(s). A continuous stare, however, has the opposite effect on cats. It’s threatening and unsettling and is used effectively as a way of maintaining their territorial distance. This is why a cat, upon entering a roomful of strangers — all but one of them committed cat lovers – will approach the “non-cat lover”, the only person not staring at her.

Next, consider her ears. Again, in a standoff between two opposing cats, the defender’s ears will lie down flat against her head for protection. The one whose ears are lying flat — with a twist, so that the tips of the backs of both ears are visible from the front — is the aggressor. Confident and curious  cats’ ears point forward as a way of listening for sounds in front of them. Cats either hunting prey or playing will also keep their ears pointing forward to collect as much auditory information as possible in order to execute a successful “pounce.”

Last is her tail. When a cat’s tail is erect along its entire length, it’s a gesture of greeting to another cat or an invitation to a friendly human for some quality “contact” rubbing. When her tail is vertical in the air with the inevitable “question mark”, it indicates that she’s happy and relaxed in her environment. It can also be a silent signal for food. When a seated cat’s tail flicks back and forth, it often shows her irritation and/or insecurity about what’s going to happen next.

A tail held down while her rump is elevated belongs to an aggressive cat standing sideways near another cat. An arched, fluffed-up tail and an arched back (this pose is familiarly called the “Halloween cat”) shows that she’s torn between being aggressive or defensive. A fluffed tail positioned either straight out or straight down indicates she’s chosen to move towards aggression. Ironically, all of these tail positions can be observed when two kittens engage in play fighting.