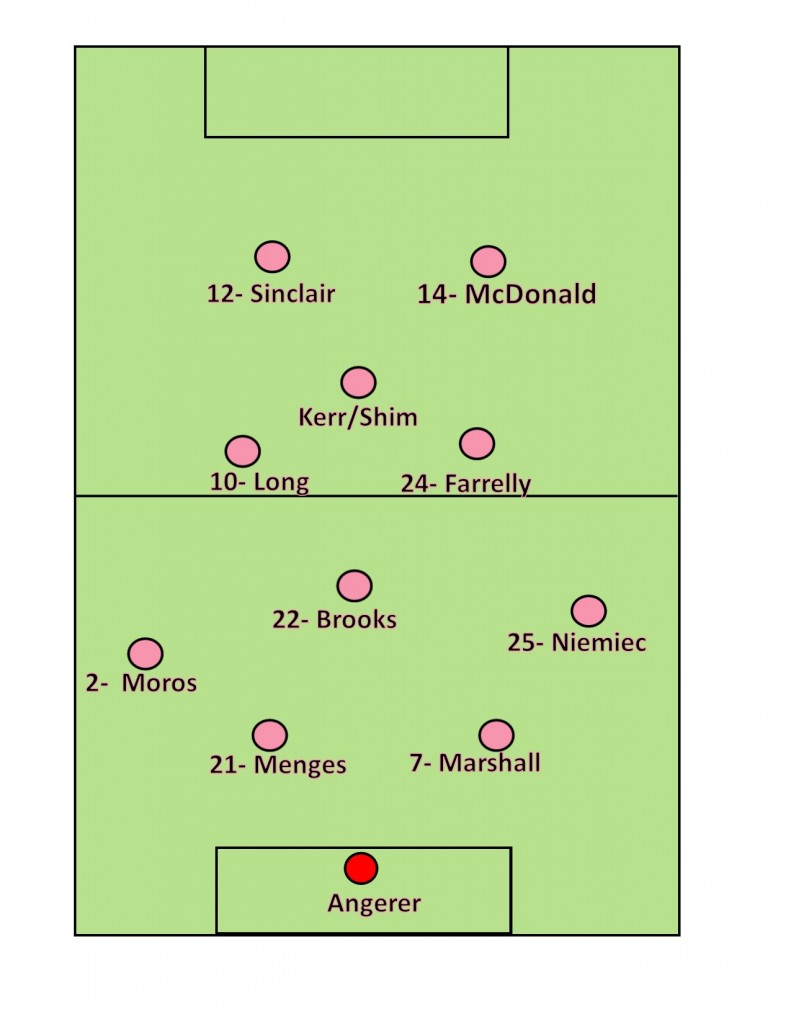 highlights will be available on the NWSL youtube page after the game.

The Thorns have started in a Diamond Midfield 4-4-2.

This image above is correct for the backline and the forwards but Angie Kerr has been playing on the left side of the diamond and Allie Long has been true to her jersey number, playing the “number 10″ attacking center midfield role in the space underneath the forwards.

long all from Allie long deep to the back post.  knocked back into the box near the penalty spot for Sinclair to challenge, but the foul was given.

Kansas City has come out in a 4-2-3-1 with Amy Rodriguez playing as the lone forward and Lauren Holiday playing underneath her.

Wings are Merritt Mathias on the right and Erika Tymrak on the left.

Nicole Barnhart is in goal.

18th minute, Amber Brooks pings a 45 yard ball wide to Niemiec who was on a run, she took a nice touch to bring it under control and maintain her momentum then whipped a cross into the area.  Sinclair challenged but its off the defender and out for a corner.

….  26th minute, for the last several minutes Kerr and Farrelly have switched sides.  Both seem comfortable on either side and switch as needed to either make a run or apply pressure.

27th,  Nadine Angerer brings the crowd to their feet for the second time tonight, moving high to her left to push a Lauren Holiday shot out for a corner.

Angerer will be a fan favorite in no time with fantastic saves made to look routine.

number 25- Niemiec our new left back from LaSalle University has had a great game getting forward on this near sideline.  Several crosses into dangerous areas, that could lead to some better opportunities if the players can work out the timing.

42nd PK Allie Long draws a Penalty,  she took the ball to the end line and cut back, Jenna Richmond left a leg in on the tackle and Long went over it, then stepped up to convert the penalty

GOAL THORNS 1-0 JUST BEFORE HALF TIME

Just as that goal was being created I was getting ready to comment on the Thorns Backline.

Marshall and Menges have done a tremendous job keeping things tight and organized.  Amber Brooks has sat in front of those two and screened anyone from running at the center backs.  From there Moros and Niemiec have attached themselves and left very little in the way of gaps for Kansas City to exploit.

2 minutes in Christine Sinclair is down after colliding heads during a header from a throw-in.  replay suggests contact as Amy Rodriguez tried to flick on the ball but managed to catch Sinclair int he face with the back/side of her head.

55th minute the thorns have conceded a Penalty kick.  Nikki Marshall took down Erika Tymrak in a perhaps silly challenge as Tymrak was not going toward goal.

FREE KICK in the 63rd to be taken by Allie Long from wide of the 18 about 23 yards from the end line.  Most of the thorns team is gathered ad the back post. Good ball in but out of bounds for a goal kick.

With this it looks like Shim will play underneath the forwards as the attacking center mid and Allie Long will move to the left side of the diamond.

88th minute Substitution at left back as Moros makes way for Sarah Huffman.  Have to assume this is a bit of an attacking substitution.  Will Huffman get forward on the left flank more than Moros has.  Most of the attacking width has been from niemiec on the right.

Final sub in the 83rd minute as local Vancouver player Kat Tarr comes on for Amber Brooks who looks to have picked up a knock.  Kat listed as a defender has slotted in as the defensive midfielder and will provide some fresh legs at the back of the midfield and in front of the back four.

assist from Allie Long on a ball from Christine Sinclair.

Coach Paul riley is animated on the sidelines shouting instructions to tighten up defensively for the last 5 plus stoppage time.

87th minute and the thorns add a third, McDonald gets her second as she latches on the end of a long curling ball behind the Kansas City back line, from Mana Shim.

Barnhart had rushed out from the Kansas City goal to apply pressure but McDonald got there first and used her right foot to sneak the ball over the keeper and into the net.

Allie Long opened the scoring after drawing a PK in the dying minutes of the first half.

Then Jessica McDonald added 2 more after Kansas City equalized on a PK from Lauren Holiday.