Following the route of Napoleon 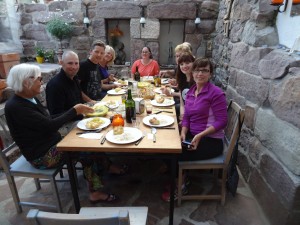 Today was the day  — the day that I was most anxious about. I would start my ascent of the Pyrenees. I had decided to break up the long mountain trek into two days. This would allow me plenty of time to take in the scenery and not feel rushed.

I woke up and had my breakfast at L’Espirit du Chemin, a gite run by a Dutch couple, in St. Jean Pied de Port. I had met several interesting people the night before at dinner, but they were all starting the day after I was. I would start this stage of the Camino alone. I had been psyching myself out for several days prior, but I was ready. Aside from a few blisters still hanging around on my feet, my body was fine. My mind was in a positive place — a “can do” attitude, if you will.

This first day is the steepest of the whole Camino Frances. I was fully prepared the moment I stepped out of the gite to tackle one of the most challening days along the whole Camino. There are two routes to take over the mountain into Roncesvalles. I decided on the more difficult, but more rewarding — The Napoleon Route. This would take me up to a village called Orisson on the first day, and I would finally reach the summit in the morning of the next day, just shy of 5,000 feet. I stepped out of the gite to a cool, crisp, cloudy morning. This would make visibility a bit difficult, but there were plenty of pilgrims heading up the mountain that day, so I figured I would be fine.

Holy cow! I thought as I started my journey upwards. This mountain was no joke. In retrospect, I was glad it was foggy and cloudy. That way, I could not see the steepness that lay ahead of me. I just kept truckin’ along, one foot in front of the other. I was glad to see others struggling as I was. I would stop to “take a picture,” but in reality I was just trying to catch my breath.

I stayed on the trail, but after about an hour I found myself alone. Slightly worried, I had wondered if I had missed a sign or turn off. I decided to just keep heading up the road. Eventually I would find Orisson, the road had to go somewhere. After 45 minutes of not seeing another soul, I came around a bend, and boom! I saw more than 20 pilgrims staring at a flock of sheep who had just been released from their pen. beautiful views once the clouds melted away in Orisson

I released a sigh of relief, and kept on heading upward. Apparently, there was a turn off for an alternative route that takes you up a shepherds path, more safe than the road. With the poor visibility, I had missed it.

Shortly after I had migrated back to the masses, and two hours and 15 minutes of trekking, I had reached my final destination for the day, the refuge in Orisson. I was pleasantly surpised with myself. “That wasn’t so bad,” I thought. I sat down and took off my shoes and ordered a tea. At this point I could see others continuing on, and I began to second guess my decision to stay the night. Maybe I could get a refund and keep going, but alas, I went with my original decision and stayed. Later, I would realize this was the best decision I could have made. ready for the day… let’s do this!

Monique, an elderly French woman, was sitting alone having her coffee. We had bunked in the same room the night before in St. Jean PdP. With her little English, my little French, and some pantomiming, we could communicate. We noticed another girl sitting alone, waiting for her bed as well. I invited her to join us. Her name was Jodi, and she was a chiropractor from England. We hit it off right away, and had decided to trek the following day together up the mountain.

Jodi was a stroke survivor at the age of 27, and had to learn to walk again. Her tale of survival and will was admirable. She was just going to do the first 5 days of the Camino to see how her body would handle it. I was happy to find a walking partner early on.

We woke up 6:30, had our breakfast and set off to the summit. The climb today was not nearly as steep as it was the previous day. Some views were distorted by the clouds, but others were miraculous. my offering for my twin at the Thibault Cross

As we neared the top, we stopped at the Thibault Cross. Many pilgrims leave something here in remembrance of a lost one. I left a bracelet in honor of my sister. Jodi, a born again Christian, asked if I would like her to say a prayer. I am not religious, but I figured it would be a nice sentiment. Jodi gave a lovely prayer as we stood hand in hand, and we both began to cry. Tears of sadness, excitement, nervousness, anger — I am not sure. That moment will stick with me for the rest of my life, and I was glad to share it with my new friend.

Struggling up the mountain I was reminded of a talk one of my former coaches had with me on the pitchers mound during a game in high school: “It’s not the skill of the man, it’s the will of the man.” I kept repeating that to myself, telling myself I could do it. Mind over matter does the body good. After another hour or so, we knew we were getting close. I continually had the “Final Countdown” song stuck in my head. We made our final push and realized we had reached the top. “What? Is this it?” I said out loud. Don’t get me wrong, the view was gorgeous, but I felt it was slightly anticlimactic. I pulled out my American flag, she pulled out her British scarf and we snapped a few photos.

We decided to take the less steep path back down; the pilgrims office in St. Jean PdP had recommended this alternative. At 1:15 in the afternoon, we were filling out our entry cards for the albergue in Roncesvalles. Exhausted from a tough couple of days and excited to have reached the summit, we enjoyed a siesta and then celebrated with a glass of sangria before heading to mass.

Tomorrow will be the test to determine how our bodies handled the climb. I popped a couple of ibuprofen as a preventative measure before bed time. I feel asleep with anxious thoughts and excited nerves. the protectress of the shepherds

I was born and raised in Vancouver, WA, and can’t imagine living anywhere else. For the past 8 summers I have traveled extensively, and volunteered in 9 countries. I hit my goal of traveling to 30 countries by the time I turned 30 years old. During the rest of the year, I work in Special Education at Battle Ground High School. In the winter of 2012, I started a non profit, 2 Hands 7 Continents, to assist others in volunteering locally and abroad. I live downtown Vancouver on Officer’s Row.