In All honesty a truthful blog(as I am)from Gerald Gaule. 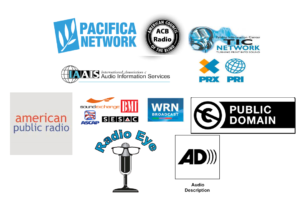 First of all, I thank you for reading this.  Many of you know I operate and own The ONLY full-time audio service(online) solely in Western Washington and Oregon for The Blind, Visually Impaired, The Disabled, and Veterans.

I started this in 2013 after spending 13 years as a volunteer working for the late Jerry Delaunay who was with Golden Hours/Omni Media Networks under The Oregon Commission for the blind, owned by Oregon Public Broadcasting. In the early years such as 1995, I was a volunteer book reader for him but ended up doing various things such as being Program Director, Music Director, Operation Manager, Engineer, Board Member, and Grant Writer( I wrote 3 grants for them ie; Pepsi, Microsoft, and Free Geek) and later as fundraiser manager and then PIO.

I left in 2013 after writing a proposal for them to apply for a Low Power FM station in The Metro area and spending several months writing the proposal and acquiring the funding and equipment in order to be “The first LPFM station on The West Coast” for radio programming for the blind, this was shut down fast without discussion and I literally quit on the spot.

Well at that moment in the car with my belongings, I made a phone call to the outgoing president of The Evergreen Radio Reading service in Seattle Washington and asked her for advice then during the conversation I was informed they were going off the air after 40 years, we had a great conversation.

The ironic thing was that I quickly planned what I was going to do and start the new service, well I had equipment and programming and that night I began CGR online with one stream and it took off.

I knew Jerry was livid and very angry, which to be honest I did not care, I was on my own, and knowing how programming worked then, I wanted to do better, the only regret was that I was at odds with Jerry and find out later he died and not mending things with him.

Here is the bad part, to be honest, I got so wrapped up in my work I started to rely on others without really checking out who a person can really be and blindly trusting and let things be handled by very shady people, but that is my fault to a point.

Well, the funny thing was I started to get complaints from potential sponsors and getting word that the people I hired were doing very shady things from misrepresentation and false claims and so on, well by having better judgment and verifying what was going on, I did fire them, well after that they still made claims and were “representing the station” allegedly. It got so bad that to be honest here(disclaimer) I had to file a restraining order because it got so much out of hand.

To this day there is still some “unwanted garbage” in my opinion from that era of the early days. Now mind you this blog is mainly in my words and to my experience and in my opinion ONLY, but again this is from my experience and what not to do. Now mind you this blog is coming from a transparent point of view(in my opinion)and being honest and with clarity, I am not here to clear my name but to say how I feel. I am thankful the streams(3)are operating and yet being an audio service(like 30 others)in the United States.

The roots of Radio Reading services go back over 50 years and “Golden Hours” was the first in The NW by being started by Graham Archer when he worked at KOIN AM/FM and TV and it was on until a few years ago. Now mind you the services are “NOT Non-Profits” nor ever claimed to be, and yes Audio/Reading services are very niched services and do to this day are very relevant and used and very accessible even though there are podcasts and other streaming services but I found out many older persons do not embrace new technology and that is very true.

Many services are online and rebroadcasted only via TV Digital subchannels(audio only) and some services still use SCA(technology)via Non-Commercial FM services(subcarrier), Non-Commercial and Educational FM stations still use this older technology going back to the days when SCA started for MUZAK but in the ’70s Golden Hours was available on KOIN FM’s SCA then GH moved to KOPB(Then KOAP)FM SCA and later moved to KOPB’s SAP service, now SAP is mainly used for TV for Spanish language broadcasts.

In 2008 KOPB(and its entire network)dropped GH from its service. Still, many audio services are on either a TV station’s Digital Subchannel(for audio), or a public access channel(audio), streaming online, and various apps for easy access for those in nursing homes or facilities. For many years the Main service CGR 1 is carried via KFAE 89.1 in The Tri-Cities area through their 67KHz service(needing a special pre-tuned closed-circuit radio)that you can switch from regular FM radio to SCA)and these radios are very inexpensive.(CGR 1 below link).

These SCA radios are wonderful, and also KPBX FM in Spokane Wa also rebroadcasts CGR 1 via their 67KHz SCA service and repeats through their FM translators via 67Khz, their translators cover parts of Washington State, parts of Oregon, Idaho, and BC. SCA Radios are covered either 67KHz or 92KHz. So CGR Radio 1 has extensive coverage via this technology as well as heard on various apps and other broadcasters.

I want to clarify that CGR/NWAIS is local and I do own and no others own it and never had, I do have a business license(in case of sponsorship), but I do run sponsor mentions for free and always have to thank them for morally supporting CGR/NWAIS Radio, I never had a sponsor that paid but they were always free mentions. To be honest, many sponsors or potential sponsors do not get the concept(honestly)of what an audio service is or the programming it has. I learned this from personal experience.

I love what I do very much, I work on it daily and for many hours a day, I literally do it all, you name it I do it. I do have in-home volunteers who read books and magazines and have for many years. They are non-paid. I have been in radio for years and worked for many stations and many functions from Announcer, Program/Music Director, Operations, Sales, Engineer, Fundraising Manager, and MORE.

I do thank my dear friend Susan Galaviz from KXRW/KXRY for being a big moral supporter and Jenny Brown from The Royal Oaks Country Club as well. Now mind you CGR NWAIS(the names I own as well as CCAIS)is an audio service that does provide VERY target specific programming with News, Educational, Community, Information, Book-Newspaper-Magazine Readings, and Entertainment really intended for The Blind, Visually Impaired, Those who cannot read or hold print, The Disabled and Veterans. And also mention NO other person I was associated with DOES not own or represent CGR/NWAIS/CCAIS and I am not responsible for their actions and never had(Disclaimer). My goal is to do in the best way I can to provide a viable, reliable, and honest service. I thank you.

The Links below do work and the listen links do work(voscast)streaming but they may be blocked due to firewalls, especially in public places, but THEY do work and I do check them many times and daily to make sure, they can be down due to maintenance through Voscast and their servers, but no server is perfect, I do my best to keep it on or investigate why it is not on via directly contacting Voscast, I have been with them since 2013.

Also if I may add, this service will be handed to someone who I trust when I pass on and who has promised not to change things but to ensure CGR/NWAIS will continue when that time comes. Thank you, Columbian for allowing me to write this. Here are the links….you may have to copy and paste them to your browser…..

CGR NWAIS Radio in Vancouver Washington, is a full-time audio information service for The Blind, Visually Impaired, The Disabled, and Veterans by providing News, Information, Community, Educational and Entertainment intended mainly for those above and from 54-90 with target-specific programming as well offering newspaper-book and magazine readings by in-home volunteers.