ONE LOVE, ONE RHYTHM 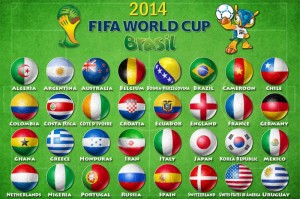 THE WORLD CUP kicked off to global fanfare in Sao Paulo on June 12. One billion people around the planet stopped what they were doing to take it in. In America, 100 million fans will tune in the Brazilian matches. I watched the wonderfully colorful Opening Ceremony on KUNP, the UNIVISION affiliate in Portland. You can also catch certain confrontations on ABC, ESPN or ESPN2. The Walt Disney Co. ought to stop peddling boat rides and hire the choreographer who created the show if it wants to corner the market for innovative entertainment. Nike, Coca-Cola, Listerine, Hyundai, Kia, Sony, Visa, Budweiser, Castrol, Johnson & Johnson, Emirates and McDonald’s are some of the event’s sponsors. Cut and Paste this LINK to watch J-Lo performing the FIFA theme song, “One Love; One Rhythm”: https://www.youtube.com/watch?feature=player_embedded&v=TGtWWb9emYI SADLY, it was business as usual around here. The Big Story on KPTV was about a man who was shot to death after attacking a cop with a crowbar. Televised images from the scene depicted dozens of obese lawmen chit-chatting with each other or presumably blabbing on cell phones with their overseers. They closed 10 blocks of Foster Road to conduct an inquiry. Nowadays, more functionaries are employed to undertake an investigation than to run a soccer club. Thirty-two nations, including the USA, will compete for The World Cup in 2014. Brazil beat Croatia 3-1 in the first game. The losers went for a bare-ball swim. Mexico socked Cameroon 1-0 on June 13. The winners meet June 17. What I’m really waiting for, though, is Australia vs. Netherlands on June 18. That’s when The Flying Dutchman (Robin van Persie) will attempt to surpass the incredible goal you can see by pasting this LINK on your address bar: http://a.abcnews.go.com/images/Sports/Ned_Goal.gif A total of 64 games will be played during the quadrennial spectacle. OLE! OLA!