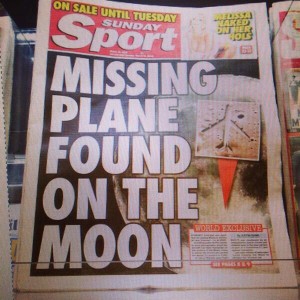 BEFORE THE MASSES became addicted to television around the middle of the 20th Century, newspapers by and large announced the big stories of the day, i.e.: LINDBERGH FLIES THE ATLANTIC (1927); WALL STREET LAYS AN EGG (1929); BONNIE & CLYDE RIDDLED WITH BULLETS (1934); OAHU BOMBED BY JAPANESE PLANES (1941); NIXON & KENNEDY MEET FACE-TO-FACE ON TV (1960). Coincidentally, soap operas were one of the staples of TV. “The Young and The Restless” on CBS managed 1000 consecutive weeks in the No. 1 spot; “General Hospital” started running on ABC back in 1963. So maybe that’s why CNN now decorates its Special Reports like televised dramas. Updates on the missing Malaysian Airlines Boeing 777 are billed as the “Mystery of Flight 370.” Chapter 42 aired on April 17. During one installment, anchorwoman Ashleigh Banfield wondered out loud why she became angry about a twist in the official timeline without bothering to ask why CNN had rattled off the original press release in the first place. Even more disconcerting is the subliminal disinformation enunciated by some of the “guests” who populate their on-going panel discussions. A former FBI Director, for instance, made a point of disparaging photographs of debris taken from a Chinese satellite as if it matters which nation solves the puzzle. But then not even a psychic who was interviewed by Wolf Blitzer could come up with an explanation. About the only aspect of the story that they haven’t mentioned is an article in a British tabloid called “Sunday Sport” which claimed the plane soared to the moon… CLOSER TO HOME, Prosecutor Sue Baur vowed to bring John Wayne Thomson back to Washington to stand trial for murder even though the serial killer was formally sentenced to death in California last month and will likely be returned to Death Row in San Quentin even if he’s convicted in Cowlitz County. This on the heels of a denial by the Texas Board of Clemency for a posthumous exoneration of Todd Willingham who was executed 10 years ago after a controversial trial for homicidal arson in 1991. Perhaps it should irk me to see tax money beating dead horses — especially with Easter Sunday in sight. In case you’ve forgotten, that’s when the resurrection of an executed Christ is celebrated, depicted here by Hippolyte Flandrin, a 19th Century French artist. On the other hand, having their offspring unearth painted eggs in pet-friendly lawns is probably of more concern to most taxpayers.