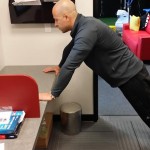 The image of countless workers exercising at their desks might serve as the fodder for office jokes, but it might not seem as crazy as it sounds.

One of the greatest enemies to a  long and functional life, are activities that keep the  human body sedentary for inordinate amounts of time.  Take a moment to think of any activity that has kept you stuck at your desk or in your chair for long periods of time.  Overall, the consensus among most people is that excessive sedentary behavior lends itself to even more sedentary behavior, lower motivation, and lack of energy.

If you sleep 7 hours a day, and sit at a desk for almost 8 hours, the math doesn’t support a great prognosis.  In fact, the time on ones posterior, can add up to over 160 total days per  year of sitting. Additional studies have suggested that people who spend six or more hours a day sitting have a 20 percent higher rate of early death than people who sat for three hours or less each day.  For many of us, that means undoing what “sitting does.”

Sitting excessively also creates various morbidity’s in terms of chronic health issues, spinal and various other problems that can be extremely debilitating.

The good news, is that a “fix” for this issue is available for those who wish to utilize the props that comprise the typical office environment.  The key, is to take the joint through a full range of motion and utilize some of the larger muscles of the body to get the job done. Movements like the squat and wall sit that put the large leg and glute muscles to work are the perfect antidote to sitting for excessive periods of time.  Movements like the tricep press-up and desk push up, successfully utilize shoulder, chest and arm muscles that give the body the freedom that unbinds it from working in a fixed position.

After all is said and done, sitting should not be a reason for any individuals life to be shortened.

Make the most of your office props, get up and move, and rejuvenate your body for that second lap in your work day.

Thanks to NASM Certified Trainer Jared Foster of Victor Fitness for demonstrating three “at desk” movements to keep energy high and metabolism moving during the work day: the desk push up, chair squat and triceps press up.