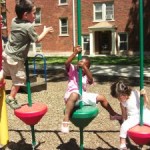 This past week I had the pleasure of putting on a speed and agility clinic for young athletes.  What makes these clinics and workshops enlightening is the broad spectrum of athletic ability each of the youngsters represents when they are taught to perform  various techniques that enhance their movement skills.

As a teacher, part of my job is  finding the similarities between what I ask people to do, and how it either currently applies, or might apply in the physical activities in their work or recreational lifestyle.What stood out the most however, is that the more I watched these young athletes, the more I realized that the agility movements we “teach” are an inherent part of how children play.

Watching children play in open space epitomizes a young body maximizing the requirements of agility. This naturally suggests the question, “does minimizing play, decrease a child’s ability  to move effectively?”  Knowing that movement is a learned behavior, the answer would be an emphatic “yes!”  Make your own observation some time, and notice all the cutting, sprinting, changing of direction, skipping and fun children demonstrate during play.  Agility is best defined as the ability to effectively and economically change direction while moving.

It is these kinds of movements that serve a person well as they move into their late teen and adult years. One would be mistaken to assume that the need for agility is a function of play only.  Taking a moment to envision scenarios where agility could either enhance personal safety or increase the joy of recreation are countless. My money says that if you played your “life movie” over again you can think of a number of situations where agility either helped you, or could have helped you.

The “living stage” by which children have a chance to work on their movement skills has been diminishing at a rapid pace. Outside of organized sports, pick-up baseball, basketball, and touch football games have diminished at a rapid pace. More and more children are moving towards self-imposed sedentary  “house arrest” through involvement with screen-based games.  An article by Dennis Cauchon, in the USA Today shared statistics that research group American Sports Data  has found bike riding alone is down 31% since 1995.

Bike riding per se could be an object of debate until one stops to think about all the good that it does for the young body – strengthening leg muscles, improving balance and eliciting the need to make cognitive and reactive choices.

The challenges to play and agility transcend bicycle riding.  In a typical week, 27% of kids ages 9 to 13 play organized baseball, but only 6% play on their own, a survey by the Centers for Disease Control and Prevention found.  This is not the best of news.

Before children start seeing play time as “forced family fun” it’s important to create a moving based atmosphere in which simple agility is practiced.  Below are several that bring out the best in agility.

When it comes to play, there is much more complexity in movement development that meets the eye.  Most importantly however is that creating an environment where play is the dominating factor in skills development sets the stage for a lifestyle that is carried well into adulthood.