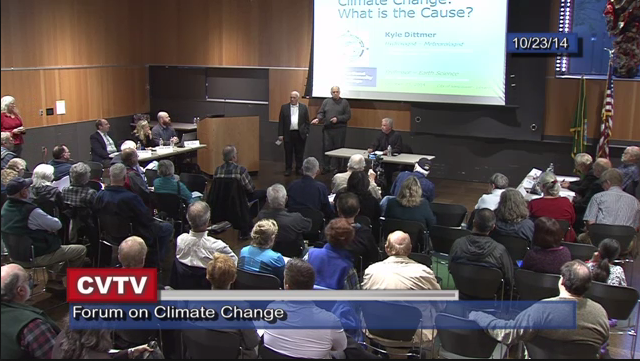 In two and a half hours of debate about climate change, Kyle Dittmer may have uttered the most pressing question of all.

“Why are we even having a debate about this issue?” He asked.

Dittmer, a hydrologist-meteorologist with the Columbia River Inter-Tribal Fish Commission, raised the point in noting that the vast majority of scientists — some 97 percent — acknowledge that climate change and global warming are happening, and human activity is the primary cause. But that didn’t stop local activist Don Steinke and Vancouver City Councilor Bill Turlay from organizing a formal debate to settle the issue once and for all in Vancouver.

The debate took place Thursday night in the Vancouver Community Library. The United Nations headquarters in New York must have already been booked for that evening.

In Don Steinke’s corner, arguing in favor of man-made climate change, were Dittmer, activist and researcher Ryan Rittenhouse, and Daphne Wysham, a climate policy fellow at the Center for Sustainable Economy.

Taking umbrage to the term “climate denier,” Easterbrook recast the debate in his remarks. The question is not what the climate is doing, he said, but why it is doing it.

“Let’s agree on something offhand: Global climate change is real,” Easterbrook said.”Global warming is real. So is global cooling.”

Easterbrook went on to list 10 “proven facts” in his presentation. Among them: No warming has occurred in the past 18 years, and carbon dioxide represents too small a percentage of the earth’s atmosphere to affect temperature in a significant way. He said natural cycles have affected the climate for millions of years, and pointed to recent cooling in Antarctica.

Easterbrook ended his presentation this way:

Dittmer noted the vast majority of the world’s glaciers are shrinking, not growing. And while data from the past two decades show cooling, temperatures from the past 100 years reveal a clear warming trend, Rittenhouse said.

“We can often get lost in the data and the graphs … to suit what our perception is,” Rittenhouse said.

“The media is not representing this issue accurately. We’re not even representing it honestly here,” Rittenhouse said. “What we’re doing here is we’re having a political, philosophical debate. We are not having a scientific debate here.”

Maybe Steinke should have been allowed 97 panelists to counter Turlay’s team of three to make things realistic.

“The scientific debate is in the peer reviewed literature,” Rittenhouse said. “It is settled, and it has been settled for quite a long time now.”

The event appeared to draw a good crowd in the library’s Columbia Room. (If you missed it, you can watch it online via CVTV.) I’m guessing not too many people changed their minds on climate change.

In any case, somebody should probably call the U.N. and tell them we took care of it.