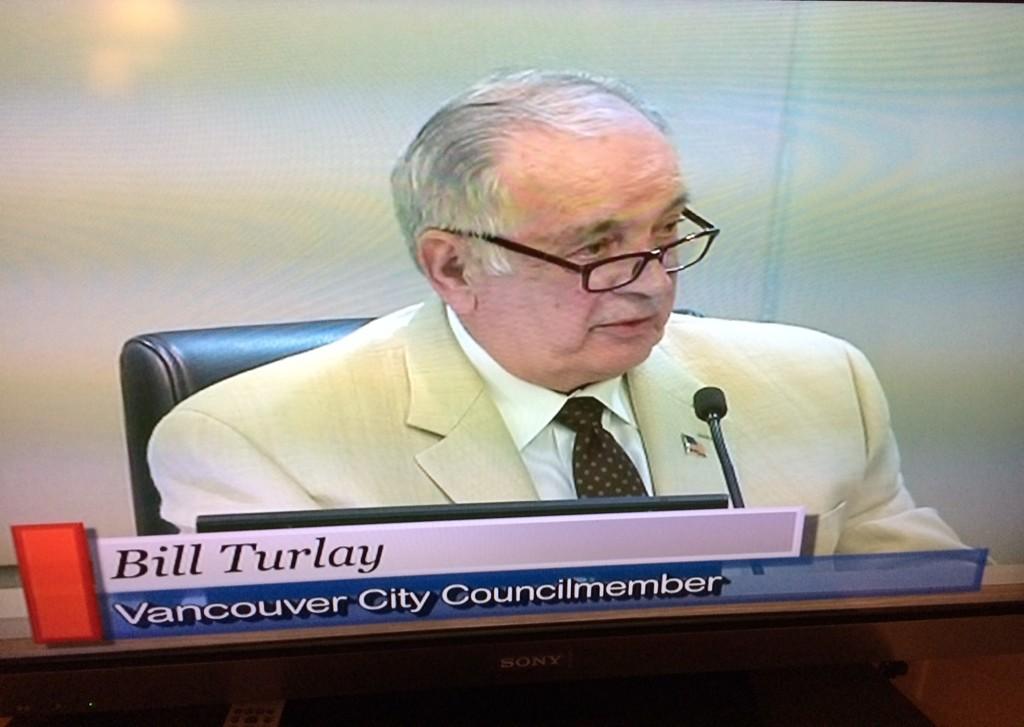 The Association of Washington Business Policy Summit is Sept. 16-18 at Suncadia Resort in Cle Elum, and Vancouver Mayor Tim Leavitt is scheduled to participate in a panel discussion titled, “When Local Politics Impact State Politics,” which will be moderated by Paul Read, publisher of the Journal of Business. Leavitt joins the Spokane and Bellevue mayors on the panel.

I saw the press release today, but I was less interested in the fact that Leavitt is participating than the fact that I’m sure Vancouver City Councilor Bill Turlay would have loved to have been asked to participate in a different panel discussion, “Climate Change: What Are The Options?”

At the end of the council meeting Monday, Turlay used his time during council communications to talk about how climate change is not man-made.  He shared some things he’s read on the Internet and assured the other councilors he’d keep forwarding them articles.

He also said he wants the city to have a public meeting about climate change.

“Let’s have a good old-fashioned debate,” he said. Hear from both sides, “slow down and talk it over,” and see exactly what climate science says and doesn’t say.

Heck, go crazy. Invite the Sierra Club! Turlay will talk to anyone.

I encourage you to watch the video. It’s about seven minutes long.

Here’s a link to Gov. Jay Inslee’s executive order, plus related comments and an Associated Press story published in The Columbian about the executive order.

Here’s a briefing on Inslee’s climate initiative that was prepared by Mark Brown, the city’s lobbyist, after Inslee’s announcement. City Manager Eric Holmes emailed the briefing to the council today:

“Governor Jay Inslee announced Tuesday that he has taken several actions designed to allow Washington to meet greenhouse gas targets for 2020 and beyond. He issued a far reaching Executive Order that sets state agencies back on a task for a goal established in 2008 that has largely been ignored as the state struggled through the Great Recession,” Brown wrote.

“While most of the Executive Order will not require legislative approval, key parts of it, such as implementing a carbon pollution market based program, will. The Governor’s actions set the stage for climate change and clean energy to join transportation and K-12 education funding as huge challenges for the 2015 legislative session.”

“Key points are summarized below. Portions in italics may have an effect on City operations,”  Brown wrote.

“The Governor created a Carbon Emissions Reduction Task Force. This group, which held its first meeting shortly after the Governor’s announcement, is to provide recommendations on the design and implementation of a market based carbon emission limit program. The task force is to complete its work in time for the 2015 Legislature to consider their recommendations.”

“The task force is charged with designing a program that balances the energy sources of the state with measures to offset cost impacts to consumers and workers, particularly low-income households and energy intensive businesses,” Brown wrote.

“The Governor has directed his agencies to work with utilities to reduce and eliminate over time the use of electrical power produced from coal. This includes both from the one in-state coal-fired plant and electricity purchased by utilities from out of state plants. Inslee has asked the Utilities and Transportation Commission to assist this effort through its jurisdictional authority and has also asked the Northwest Power and Conservation Council to pursue reduction in coal fired electricity in its next Power Plan for the region.”

“WSDOT has been charged by the Governor to work with local, regional and federal agencies to develop an action plan to advance electric vehicle use including strategies for both financial and non-financial incentives for consumers and businesses. The department is also tasked with advancing the build out of the electric vehicle charging network along state highways and at key destinations.”

“The department is also charged to consult with the Freight Mobility Strategic Investment Board and the Transportation Improvement Board to review existing grant programs to identify opportunities to increase state investment in multimodal transportation. The department is also charged with making changes to its corridor work to prioritize strategies that foster choices, innovative land use and reduce transportation emissions.”

“The Washington State University Energy Program and the Department of Commerce are tasked with creating a new program to assist deployment of new renewable energy and energy efficiency technologies. The two agencies are also charged with advancing solar power in the state by examining current laws, rules and policies to determine where changes may be needed to encourage greater use of solar.”

“Commerce and WSU will work with the State Building Code Council and others develop and implement a new statewide program to significantly improve energy performance of public and private buildings.”

“This new program must include a way that consumers and businesses can have easy access to energy use, efficiency and cost information, improved access to financing for upgrades, support for low-income weatherization assistance and setting minimum standards for energy efficiency and the upgrade of all street lighting in the state to more energy efficient technology.”