Who knew a written history of county treasurers would be incredible? 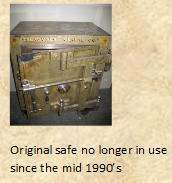 The All Politics is Local team was digging through the Clark County website a few months back when this incredible sentence was discovered on Clark County Treasurer Doug Lasher’s web page:

The shared reaction was that the document was going to be awesome. Wow! Just imagine what the county tax rolls looked like when this was the safe being used as the primary piggy bank.

Oh wait, guess we don’t have to imagine:

CLARKE COUNTY STATISTICS. Mr. Geo. J. Tool’ey has finished taking the assessment of the county, and the roll is now in the hands of the Commissioners. It shows as the total assessment of the county, $770,935, being an increase over last year of $109,325. The total number of men liable to pay poll tax is COG; white males, 1,909; white females, 1,075; colored males, (Indians) 33; colored females, (Indians) 31; males of foreign birth, 301; females of foreign birth, 170; blind, 2; idiotic, 1; families, 731; dwelling houses, 730; total number of inhabitants on the first day of March last, 3,708. This does not include the floating population, which, together with tire immigration since the first of March, would make the amount something over 4,000.
The Vancouver Independent, August 9, 1877

Here’s a poll tax, which meant folks had to pay if they wanted to vote.

One could suppose that if the county was charging folks to vote that it made just as much sense to have someone counting up gender, race and foreign accents. Because, hey, why not at that point? But what gives with the moniker “idiotic” thrown in there for someone? Is this one of those examples of when people say “those were just the way things were,” and move on?

Credit to Lasher and his team for not washing over this part. History can be rough at times.

1861-1862
Louis Sohns
Perhaps no man is better known throughout the length and breadth of Clarke County or more highly respected than is the subject of this brief sketch whose portrait forms the frontispiece to this work.

Well, alright. Sohns does have a Wikipedia entry. Still, Tonya Harding must be miffed.

The County Treasurer is after delinquent taxpayers, and all concerned will do well to call and pay their taxes.
The Vancouver Independent

Although the County Treasurer is not obliged to send notice to delinquent taxpayers, he has done so, entirely for their benefit.
The Vancouver Independent, February 21, 1878

Taxes – There are many persons in the county who have not yet paid taxes whose post office address Treasurer Bier does not have. He will give to all such persons upon application a statement of their taxes due and payable.
The Independent,February 28, 1878

Those first two statements must be among the smarmiest things ever written in a newspaper.

The third one seems like ol’ Treasurer Bier is trying to just trick people into reporting themselves with a matter of fact approach.

…are all about Doug Lasher’s tenure.

That’s seven pages there. Really, the last page is just an overrun on reference materials and two pages are pretty much all images, so it’s more like four pages on the Lasher administration.

Even Louis Sohns, the most well known guy in the county ever, only got like half a page.

You know what? Just read it. It is incredible.