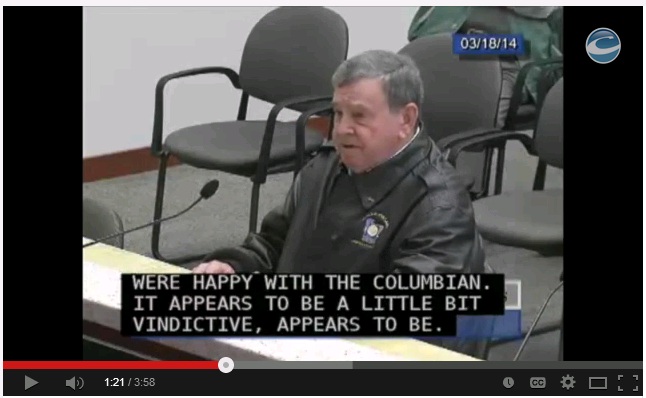 It’s no secret that Royce Pollard, former mayor of America’s Vancouver, and county commissioners Tom Mielke and David Madore don’t see eye-to-eye.  But now another body part is getting involved.

Madore’s backside, and Pollard’s promise to kiss it. Apologies for the mental image and for any dreams it may haunt.

Commenting at this week’s commissioners meeting, on a range of topics, Pollard voiced criticism of Madore’s proposal to build an “East County Bridge” in five years.  He even made a friendly wager with the commissioner.

I wanted to talk about the Madore five-year bridge. That’s very aggressive. It might be funny if this wasn’t a travesty of justice …. I’ve got to tell you, if you build a bridge in five years, six years or seven years, I will kiss your butt in downtown Vancouver, on Main Street during daytime. It will never happen. You have no idea of what the hoops are that you will have to jump through.

Indeed, that may be the case. Such a project, as The Columbian reported, would take a tremendous amount of buy-in from a large number of local partners, both in Washington and Oregon. The mayor of one of those necessary partners — Vancouver’s Tim Leavitt — has said he has no desire to discuss with Madore what it would take to build an East County bridge.

Readers may remember Madore was under the impression that Southeast 192nd Avenue was inside Camas city limits; in fact, it’s part of Vancouver. That means he’ll need overt approval from Vancouver, which seems unlikely. Oops. Madore took to Facebook earlier this week to explain how the confusion happened.

You see, it’s all Google’s fault! It’s only natural, as a county commissioner, to rely on information culled from a Bay Area-based company rather than the county’s own searchable GIS system, to which everyone has access.

But that’s neither here nor there. The Columbian has a convenient countdown clock ticking away the seconds until the toll-free crossing is supposed to open. It’s unclear whether Pollard has the page bookmarked.