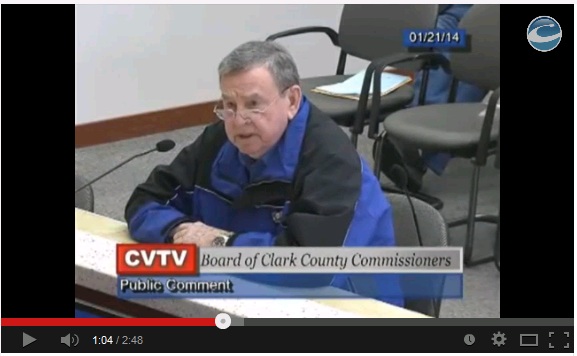 During the public comment period Tuesday, Pollard sauntered up to the table like a man with something on his mind. Indeed, he had several things on his mind, and one pretty gross image he shared with everyone (and now I can’t get it out of my mind). It pertained to the merits of kissing one’s own sister.

With remarks steeped in sarcasm, Pollard laid into commissioners for alienating staff members and wasting time on certain issues — cough, advisory votes, cough — at the expense of other topics. It led to this wonderful quote: “Advisory votes are like kissing your sister; nobody gets much out of that.”

And that led APIL’s own Stephanie Rice to conclude:

The timing does seem uncanny …

But the fun didn’t end there. I’ve transcribed the entire exchange between Pollard and Commissioner Tom Mielke below. But please watch the video if you can; it’s fantastic.

Mielke: Morning Mary … mayor. How are you doing?

Pollard: I have a few comments. First, I believe in prayer, but I don’t think it has a place in these kinds of meetings.

A comment on advisory votes – an aside: Advisory votes are like kissing your sister; no one gets much out of that. It’s a waste of money.

So, to change tone, I want to congratulate you all on the transparency, the cleaning up of government, and a number of other things. You all were able to get rid of deadwood in the county. I’ll just name a few: (County Administrator Bill) Barron, (Public Works Director Pete) Capell, (attorney Bronson) Potter, (Environmental Services Director Kevin) Gray, (Chief Diversity and Inclusion Officer) Rekah Strong. Congratulations on your transparency and openness. While I was gone, I understand you limited free speech, somewhat, by banning newspapers.

Pollard: Will you let me talk? And then you can talk. Of course, you have employees who are threatening citizens with lawsuits, which I still find amazing. I wonder what the status of that is. I’m sure you’re worried about your own lawsuit. I congratulate you on your hiring of the overly qualified Mr. Beantown … I’m sorry, Benton. I have to tell you, my Chinese Shar Pei dog, Ralph, probably knows as much about environmental issues as Benton, and he died 10 years ago.

You’ve done nothing about these and other serious violations of etiquette. I mean, you allow people to swear — damn. I just want you to know you’re doing a super job, and keep up the good work.

Oh, I’m sorry, you wanted to say something Mr. Mielke.