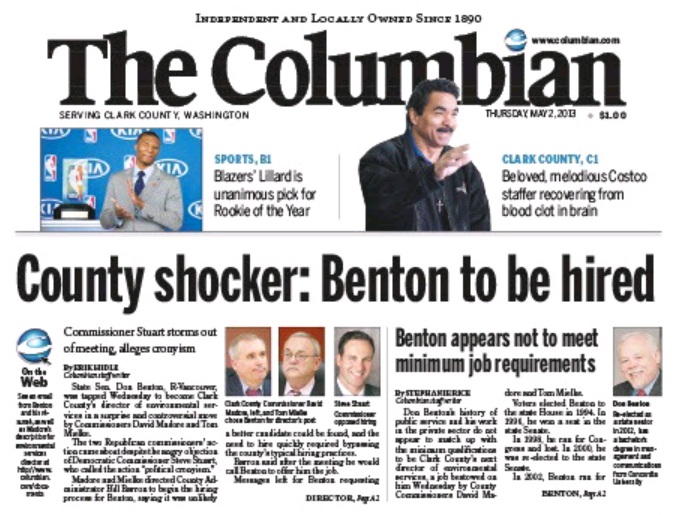 Mielke said Wednesday he thinks the newspapers are bad for employee morale because they include “bad” stories about the county. When told of Mielke’s decision, Commissioner Steve Stuart laughed.

“We’re all about openness and transparency,” Big Stu said, mocking his fellow commissioners.

So Mielke, you don’t want employees seeing covers like this one? Sigh. No more newspapers on the table. (See? You really can believe what you read in The Daily Couve.)

This must be why in the past year the county has lost its administrator, deputy administrator, director of public health — actually, I’ll give the county a pass on losing John Wiesman, as he was appointed by Gov. Inslee to be Secretary of Health, but then the department’s No. 2 fled to Washington County — the director of public works, the budget director, the chief civil deputy prosecutor (and three more attorneys from that office have announced plans to leave or have left) and other employees, including one who called the commissioners bullies in a public hearing.

I’m sure they really left the county because it gave them the sads to see newspapers in the office.

I suspect Mielke is wrong on this one.

At least, I’ve had lots of county employees tell me they love “All Politics is Local.”