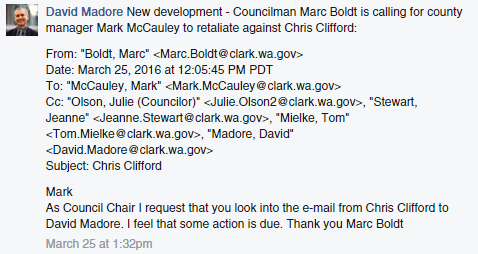 One would think that when an employee files a whistle-blower complaint against an elected official, it might be wise for said elected to wait to comment until an investigation is complete.

But not Councilor David Madore.

Last week, we reported on Community Planning Director Oliver Orjiako’s whistle-blower and discrimination complaints against the Republican councilor. Orjiako cited Madore’s involvement in the county’s 20-year growth plan, as well as his accusations that planning staff have lied to promote their own agenda.

Neither Madore nor Clark County responded for that story, which came as no surprise to me. Less surprising was the fact that Madore did eventually comment on the matter – on his Facebook page.

Here are the posts and following comments. Orjiako’s attorney Greg Ferguson, said Madore can try to claim he’s using his First Amendment rights to speak about this complaint. But, he said it won’t work.

“Courts have placed limits on an elected official’s right to comment on matters directly related to his or her public office, especially when that involves running roughshod over the rights of employees. This is one of those instances,” Ferguson said. “Retaliation can take many forms and he appears to be determined to run the gamut.”