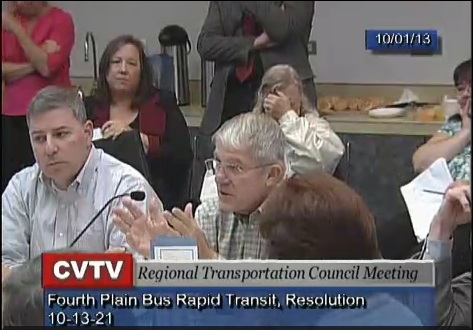 Vancouver City Councilor Larry Smith turned 71 on Oct. 1, and boy, did he get a birthday surprise!

Ninety minutes before the start of a meeting of the Southwest Washington Regional Transportation Council, City Councilor Jeanne Stewart emailed her colleagues to let them know that Bus Rapid Transit was on the agenda. The city council has a policy that councilors representing the city on boards vote the will of the council majority. While the council supports Bus Rapid Transit, Stewart does not.

“In May 2012, the majority of Vancouver City Council members approved a resolution approving a Locally Approved Alternative to move the BRT project forward and to support the project at the RTC. Subsequent to that Council decision, in November 2012, a ballot measure to approve fund for BRT maintenance and operation was put on a ballot to citizens. The outcome of that vote, by 56% was the voters saying NO to funding of BRT.
As an elected official, my job is to represent the interests of the citizens and I am unwilling to disregard the outcome of the ballot measure which was a majority indication from citizens that they did not support funding for BRT,” Stewart wrote in her email to the council and City Manager Eric Holmes, which was sent at 2:31 p.m.

The RTC meeting was scheduled to start at 4 p.m.

“The purpose of this memo is to indicate that I will not be supportive at the RTC Board to continue to press forward with BRT as it appears to be contrary to what the voters told us. I do not believe it is responsible to ignore the outcome of that vote. Please let me know if a replacement is being sent to RTC,” Stewart wrote.

Fewer than 20 minutes later, Smith hit “reply all.” He was on it, as he had served as an alternate before for Stewart when she didn’t feel she could represent the will of the council.

He didn’t even mention the meeting would cut into his birthday plans. He was going to go to the First Citizen ceremony since he has known honoree Robert Schaefer for 20 years, then out to dinner.

Instead, he decided to be a team player. (“That’s not what my wife said,” Smith said Thursday.)

Doesn’t this look like a fun way to spend your birthday? At the meeting, Clark County Commissioner David Madore proposed yet another  resolution to try and derail BRT. Smith joined the majority “no” vote.

He said it was pretty lively (for an RTC meeting). I know I was amused just watching the video when I saw Commissioner Steve Stuart’s expression after Madore invited his good friend Sen. Don Benton to explain a state law that Madore felt was relevant.

Way to have a poker face, Big Stu.