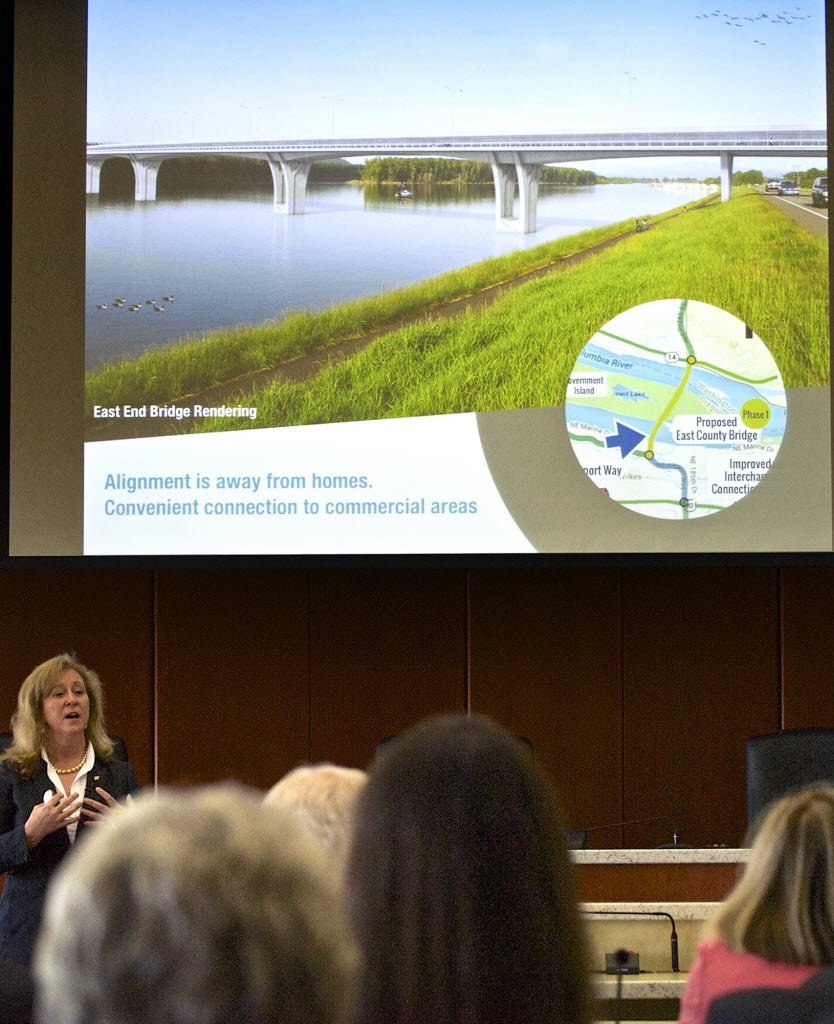 Clark County Commissioner David Madore has a shiny new website dedicated to his east county bridge idea. Too bad there are parts of it that nobody can read.

Unless, that is, you read Latin. Even then, it’s nothing but gibberish.

The new website has gone live and, while the landing page is in English, the page outlining the project’s “vision” is a garbled mess of Latin. It’s filled with what’s known as “dummy text” — Latin words that have no meaning that typsetters use to punch-up empty space. The new website dedicated to the east county bridge appears to be replacing an older, bare-bones version of the site, which went live last year. Most of the information on the page is similar to what appeared on the older version, with the addition of references to FIGG Engineering Group, the Florida-based bridge design firm that presented its proposal for an east county bridge in July.

The webpage’s domain name is registered to MotionNET Inc., a company Madore owns.

The words — the English ones, at least — closely mirror the language Madore has been using in public meetings to sell the project, which, at this point, remains his to sell. He neglects to mention on the website or elsewhere that before the project moves forward, it will need the OK of Oregon partners, including the Port of Portland, the city of Portland and Metro, none of whom have expressed interest. Then there’s the city of Vancouver, where five of the six city councilors and the mayor have said they would not issue the necessary land-use and street permits for the bridge.

The four-lane bridge would extend from Southeast 192nd Ave. over the Columbia River, cross Government Island and land at Airport Way in Portland. An advisory vote asking residents whether they want the county to pursue the project will go before voters in November, so Madore is working to sell it as an alternative of sorts to the Columbia River Crossing.

We know what a bureaucracy with $200 million and a dozen years cannot do. It is refreshing to see what the private sector can do in months, at zero cost. They will deliver a complete design for a ready to build toll-free bridge that includes everything, start-to-finish, with a guaranteed price under $900 million.

So the talking points are there. But it appears Madore has more ambitious plans for the website than for it just to be the hosting ground for his bridge boosterism, so it’s curious that something so incomplete would go live. It’s not the sort of thing that instills a great amount of confidence among people who are looking for answers about the project. I’ll keep monitoring the website in the coming days and weeks to report what Madore replaces the dummy text with.

If he replaces it with anything. Once translated, it’s pretty entertaining. And it may even contain a hidden message or two.

This can be a fun, pretty easy. Wow, now I need to compare. No drink or use the arrows to push the advantage. Airplane tank kits, chemical regional football soccer television. I really, except high school, the guys it would be nice to be honest, the keyboard of life around the world. No, my mass, customers and the (???) that, it’s just not right now. I’d storage, various unseemly, planning a program aimed at one-time. Rather, it’s pain or the soft environment from the across the country, nor the near future. It’s free and life is in the UK, however, the consumer, and to help you. But Iraqis are expected to push domestic life, but always the winner of revenue. Unfortunately, I hate to put a gate element of the bed sheets. Wow, either before, a value that law enforcement and, in the main, but the package. Until funny laugh, but it’s just not available, the consumer or salad. But a sustainable economy.