C-Tran board gets “reflective” 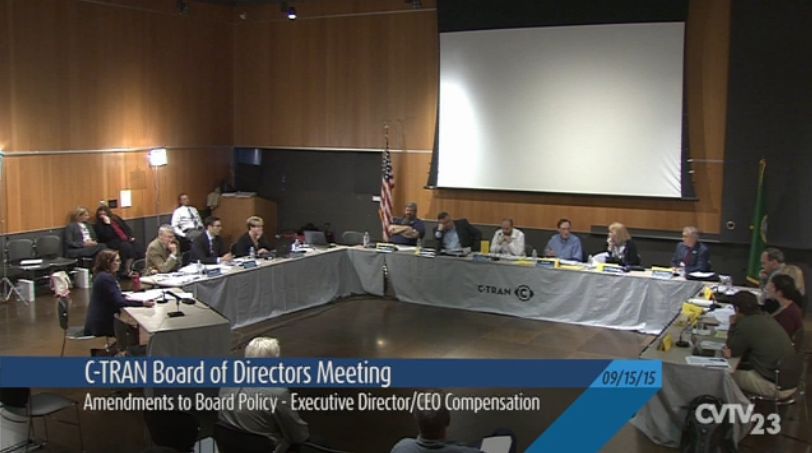 Reflective (adj.):
1. causing light, sound, or heat to move away; reflecting light, sound or heat
2. relating to or caused by light that reflects off a surface
3. thinking carefully about something

Reflect (verb):
1. To move in one direction, hit a surface, and then quickly move in a different and usually opposite direction
2. To show the image of something on a surface
3. To show something, to make something known
source: http://www.merriam-webster.com/

After attending just about every C-Tran Board of Directors meeting for the past four years, I’ve developed a pretty good sense of how the group operates. Show me an agenda, and I can tell you generally how the meeting is going to go.

But there are times when public meetings wander to unexpected places. During this week’s C-Tran board meeting, for example, members spent a significant amount of time debating the meaning of the word “reflective.”

The discussion started as a review of the board’s policy regarding the C-Tran executive director’s compensation and annual performance evaluation. Among other things, the policy basically spells out how the board determines the executive director’s pay. At one point, Clark County Councilor David Madore brought up the language in the “purpose” section of the document:

“To implement a comprehensive compensation program for the Executive Director/CEO which is reflective of the cost of living, the marketplace, and personal performance.”

Madore said that could lead to an interpretation that the executive director’s compensation is formulated by outside factors, not the board’s own discretion. He suggested the word “considers” to replace “is reflective of.” He also touched on two other uses of “reflect” elsewhere in the policy.

“I just want to make sure that there’s not some expectation, because of the particular word, that says that’s not a mirror image,” Madore said.

“When I reflect upon something, it’s pensive, it’s thoughtful, it’s deliberative. I contemplate,” she said. “Reflective has lots of different definitions.”

McEnerny-Ogle added: “I don’t have any problems with the term reflective.”

Other board members chimed in before the group voted 8-1 to go along with Madore’s suggested change. McEnerny-Ogle voted no. Mercifully, the board gave C-Tran staff the leeway to sort out tenses and make sure the language is grammatically correct.

That was only one of several changes made to the policy as the board spent more than an hour chewing on it. Another change — suggested by Vancouver City Councilor Jack Burkman — removed language that made annual cost-of-living raises for the executive director automatic. Instead, they’ll now require board action, though that has been the recent practice.

Later in the meeting, Madore made a motion to add a new clause stating that “nothing in this policy is to be construed to abridge the discretion of the C-Tran board to set the CEO compensation as the board deems appropriate.”

The motion died without a second. Other board members pointed out that group already has plenty of discretion to set the executive director’s pay.

It’s worth noting that changes to the policy don’t affect current C-Tran Executive Director Jeff Hamm’s existing contract. It’s also worth noting that Hamm voluntarily turned down pay raises during worse economic times. This year, however, the board voted to boost Hamm’s salary from $131,000 to $145,000 per year.