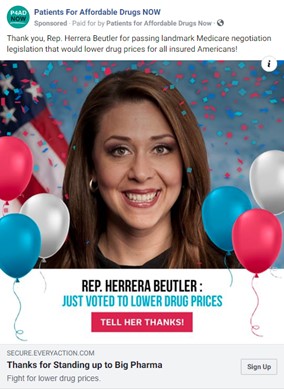 The campaign, funded by Patients for Affordable Drugs NOW, will thank Herrera Beutler for voting in favor of H.R. 3 in a rebuke of her party’s position. Herrera Beutler was one of only two Republicans in Congress to vote for the bill. The other was Rep. Brian Fitzpatrick of Pennsylvania.

If enacted, the bill would change the way the prices of medications are set — by allowing the federal government to negotiate the cost prescription drugs directly with pharmaceutical manufacturers, by establishing fines for manufacturers who raise prices faster than inflation, and by capping annual out-of-pocket expenses for Medicare recipients at $2,000. Pharmaceutical companies expressed strong opposition, claiming that overreaching price controls in the industry would the hurt research and development of new medications.

After her vote, Herrera Beutler said the bill was “was far from perfect, but it represents the only opportunity I’ve had to advance a significant proposal to the Senate and compel action to lower drug prices.”

“We know Big Pharma didn’t want her to vote this way, we know that drug companies ran ads,” said Ben Wakana, the executive director of the patient advocacy organization. “Given the way she voted, she clearly stood up to intense lobbying pressure from drug companies.”

The Patients for Affordable Drugs NOW campaign will feature sponsored posts on Facebook, Youtube and Twitter, and will cost “in the low five figures,” Wakana added.

The organization will run similar ad campaigns in a dozen other districts with vulnerable lawmakers who voted in favor of H.R. 3, including Fitzpatrick and several Democrats in swing districts. Wakana said his organization is bipartisan, and willing to support anyone in its lobbying efforts to lower the cost of medication.

“Our first layer of calculations is, do we feel like drug companies are going to attack someone over their vote?” Wakana said. “We’re not blind to the fact that drug companies want to kick off people who are voting in patient’s interests and supporting reforms.”

H.R. 3 is highly unlikely to make it through the Senate, and on the off chance that it does, President Donald Trump has already indicated that he will veto it. But another, scaled-back version of the bill, the Senate’s Prescription Drug Pricing Reduction Act, has a shot. Wakana said his organization would support some version of a law that consolidated the House and Senate bills into something that the president would pass.