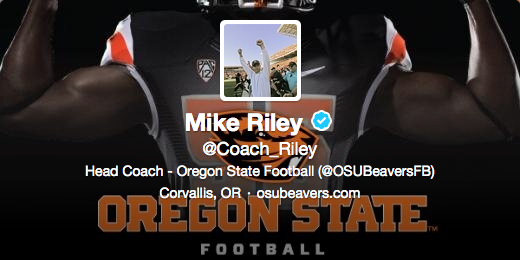 Oregon State Coach Mike Riley @Coach_Riley is a great “follow” on Twitter. His tweets range from practice anecdotes to off-the-wall humor. He included a video from his team’s “Slip and Slide” day and urged followers to ask Siri, Apple’s virtual personal assistant, who her favorite football team is. She answers “Oregon State” because she “prefers the underdogs.” The program actually searches for the last team listed in the latest college football poll — The Beavers are No. 25 in the preseason rankings.

It goes along perfectly with Riley’s affable personality and open access to his team. He rarely closes practice to the media. More obscure but equally entertaining is Washington State Coach Mike Leach, @Coach_Leach. He engages with fans on many topics outside of football. He lists he thinks everyone should watch and asks his followers who the best managers in baseball are. He also posts photos of a Mike Leach figurine at spots around campus. Washington Coach Steve Sarkisian @CoachSark comes and goes on Twitter. Some days, he’ll rile up Dawg fans with tweets saying simply “Woof Woof,”  but then he’ll vanish for days on end. When practice began this month, the “Woof, Woof” tweets faded … not even a howl in the distance.

Oregon Coach Mark Helfrich @CoachHelfrich has tweeted once between mid-June and today. He must have inherited Chip Kelly’s desire to keep a low public profile.