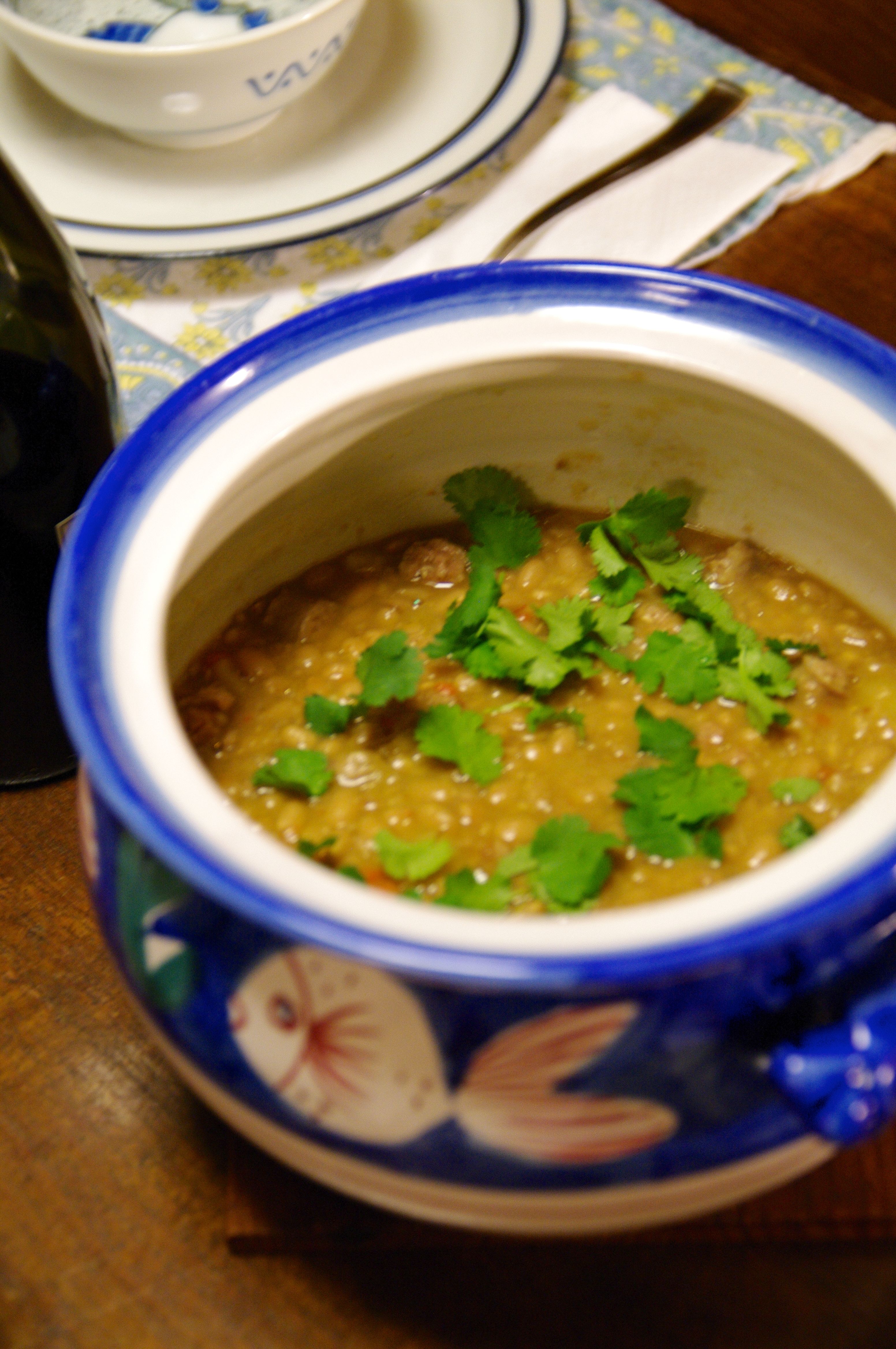 The Intrepid One likes to add cilantro as a design element, but you could use parsley or chives.

I figured out a thing or two about making navy bean soup over the weekend, and that wasn’t my intention.

I had planned to make Tuscan white beans, a recipe that involved beans, garlic, red onion and celery, among other things. The beans could have been an accompaniment to green salad, a side dish or a spread atop dry french bread. But something went wrong, so I gave up and made a pot of soup.

The recipe called for soaking 2 cups of Great Northern beans in water overnight. No problem, I thought: I have the beans stuck away in the pantry, and I’ll just dig them out and let them sit in water. They sat longer than overnight, mostly because I was busy in the morning and I wanted to make a run to Hood River, even though Interstate 84 was blocked on the Oregon side and I had to take the slower but more beautiful Washington route. By the time I got around to my beans, I suspect they had 30 hours in the water.

Let me tell you right now I’ve never had much success soaking and cooking beans. They’ve always been too crunchy. And while I’m confessing to such things, let me add that I’ve never been much good at making beef stew, but that’s for a future blog experiment. I’ve already had a conversation with my friend Kathleen Glanville, who whipped up stew for friends during the snow storm.

I diced a red onion, large carrot and celery stalk and sautéed them in a couple of tablespoons of olive oil. Then I added salt, stirring occasionally and letting everything get soft. It took about 10 minutes. Now here is where the recipe gets interesting, I thought. Next, you’re suppose to add about 6 cups of chicken broth — I remember thinking that was a lot of liquid for what I wanted — and throw in a head of garlic that has the outer papery leaves torn away and the top cut off about one-eighth of an inch, exposing the heads. The idea is to let the garlic simmer in the broth so you can remove it and then squeeze the pulp of the garlic heads back into the soup.

That whole garlic step is what got me to try the recipe in the first place. Even though I cooked the mixture for three hours, the beans still were crunchy. I could see that this wasn’t going to work. I gave up and added more broth, squeezed the garlic, sautéed some breakfast sausages and cut them up, removed the bay leaf I had added early on and hoped for the best. I diced up a Yukon gold potato to give the soup some body and thicken it a bit, and simmered it for another hour. The soup was OK, but not great. The Intrepid One liked it and swears he’ll take it every day for lunch.

I think I figured out where I went wrong, thanks to a Google stop here and there: You are supposed to use fresh beans. I’ll bet mine had been sitting for a year or two. Then I had a flashback to a conversation of about five months ago. Don, a former colleague at The Columbian, had inquired about keeping beans too long. I think he concluded that it was best to use fresh, but he went ahead and used the older ones anyway. His soup turned out fine, as I recall.

I’ll get around to a beef stew pretty soon, Kathleen. No. 2 son makes a recipe from Julia Child that has beer, beef and onions. What dude wouldn’t like something like that, he asks?