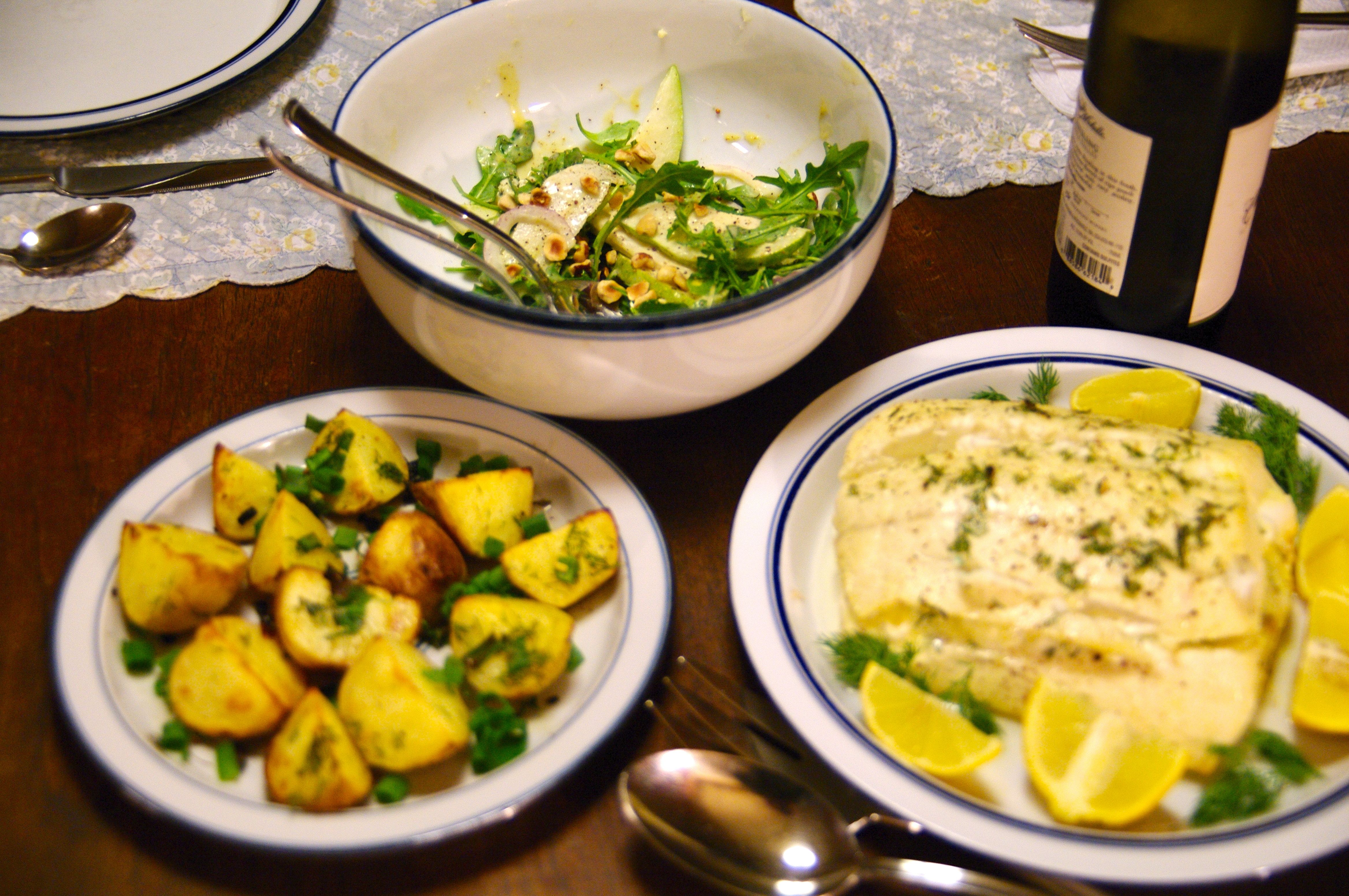 We’re still using fish from the great Alaska fishing trip. Leftover fish from this dinner went into fish tacos the next evening.

This is a post about making-do with what I had on hand. It is also a post about what could have made the dinner better. There, I’ve said it. I debated whether to post at all, given the shortcomings, but on balance, I decided that simple sometimes works best. As a bonus, we had enough leftover fish that the next night the Intrepid One and I made fish tacos. And after that, we had fish to add to a stew with shrimp and clams. (That would never happen when we were a young family with growing boys.)

So, remember all that fish in my freezer from the great Alaska fishing trip? (See posts of July 18 and Aug. 18.) I pulled out a vacuum-sealed package of black cod and put together a feast.

First the cod: It was a thick piece, perfect for cutting a small pocket on the side to stuff with a little Dungeness crab and some cheese. I used Fromager d’Affinois, made in France from cow’s milk and a lot like Brie, only creamier. I mixed the crab and chunks of cheese with a heaping tablespoon of mayo and some fresh dill, salt and pepper, and then stuffed it into the pocket, closing the fillet with toothpicks. I baked the fish in a pan with olive oil and a bit of butter for about 15 minutes at 400 degrees. (I baked for 20 and was sorry.)

This is a riff on a recipe from Jake’s Famous Crawfish. I’ve made it before, but I didn’t have time to put Jake’s version on the table. Jake’s serves “Baked halibut with crab and brie” with a beurre blanc sauce. (The rich topping really makes the dish company-worthy, and I should have made it. Next time.)

Now the potatoes: I washed and quartered four small Yukon gold potatoes. Then I tossed them in olive oil on a cookie sheet and sent them into the oven while the fish was baking. About halfway through, I added three cloves of chopped garlic and some salt and pepper. When the potatoes were done, I sprinkled with some fresh dill. You could use parsley as well.

And finally the salad: I’m a fan of arugula, so that was the basis for the salad. I threw in sliced green pear, though I would have preferred the red Anjou variety. The salad was topped with red onion and filberts. Normally, I would have used the Intrepid One’s balsamic vinegar dressing, but we were out, and things were coming together quickly. I had some honey mustard in the fridge.

Last word: Quick and easy to get on the table.