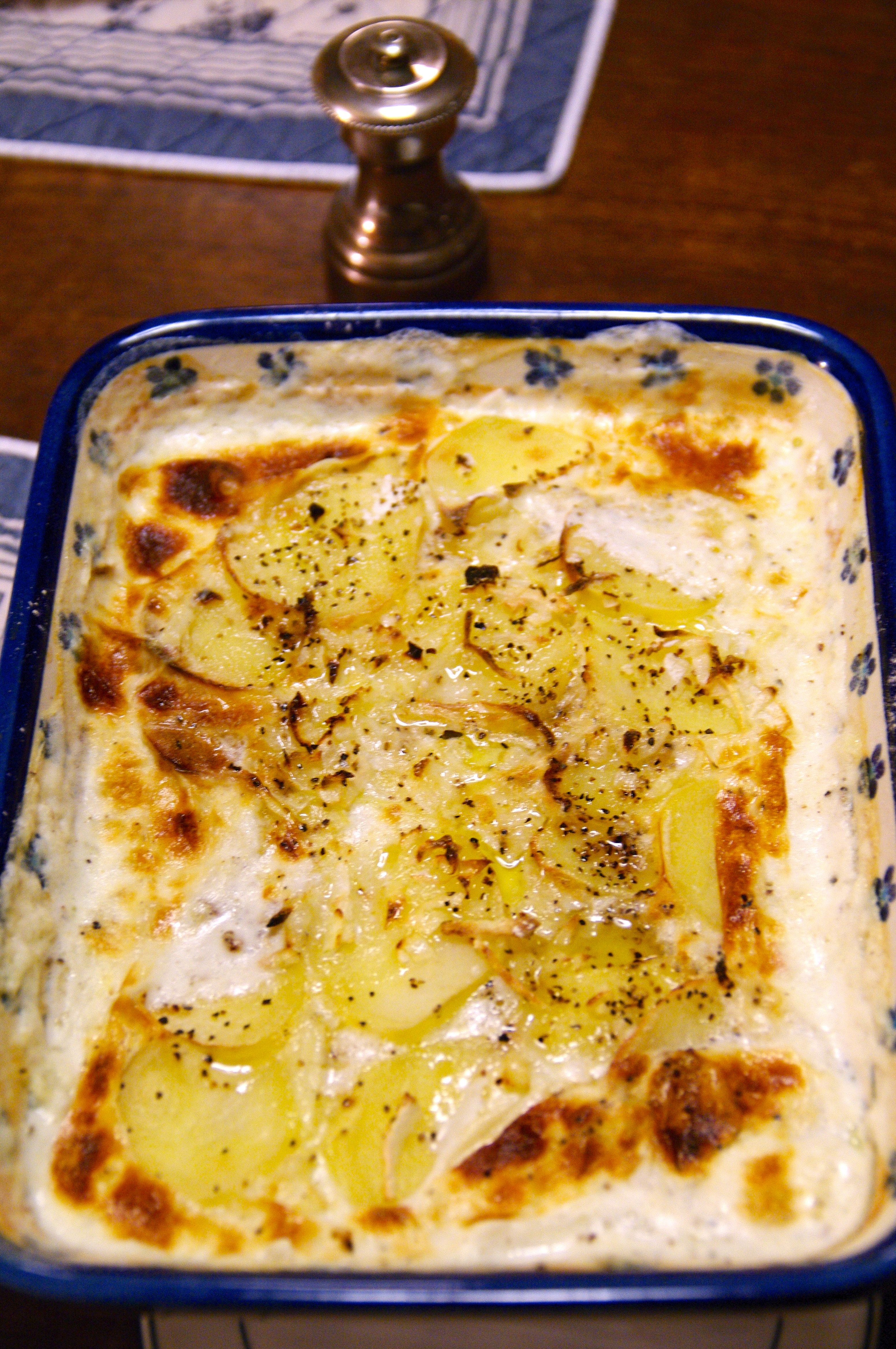 Thinly sliced potatoes and lots of onions make this a hearty side dish.

I had a rough December. Things were going great when I was with my pals in Seattle, but shortly after I got home, life went messy on me.

First, my dog got salmon poisoning. Yes, she ingested raw salmon just waiting on the banks of the Columbia for a labrador to snuffle out and make a feast. (Usually, she just rolls in dead fish, and I have to take her to the groomer.) I figure it was in the run-up to Thanksgiving, though I don’t know for sure. She was desperately sick, not responding to antibiotics until I took her to Columbia River Veterinarian Services where they gave her massive doses of medication in an IV and kept her overnight. (Thank you, CRVS.)

The fish are infected with a parasite called Nanophyetus salmincola. Only 10 percent of dogs survive if not treated, and death usually occurs within 14 days of ingesting the fish.

What’s this to do with Small Plates? (I suppose I’ve ruined your appetite.) Well, I spent most of my cooking time last month making chicken and rice for Abby, the chocolate lab. (The recipe is simple: boil chicken, boil rice, send them through the Cuisinart.)

Then I got the latest iteration of flu that’s going around. I haven’t been sick in at least three years, and I mostly attribute that to lots of yoga and avoiding crowds. I don’t know if that’s a valid cause-and-effect relationship, but in my mind it works. I was busy with the dog, busy with chores, and I didn’t get to yoga much. And yes, I had a flu shot a couple of months ago, and people assure me that it’s not the same virus.

So I haven’t done much in the kitchen, other than make dog food and barely get through the family’s usual Christmas eve seafood chowder and Christmas Day ham dinner, all pretty standard fare. And I hope the foregoing paragraphs about illnesses don’t freak you out so you can’t look at the potatoes. But here is the recipe my mother-in-law taught me. I can’t tell you amounts, just do the layers and you’ll see how much of each ingredient you’ll need. Dorothy Cleaveland always used russets, but I’ve switched to Yukon golds:

Preheat oven to 350 degrees, and butter a baking dish.

Peel and thinly slice about seven Yukon gold potatoes. Layer one-third of them on the bottom of the baking dish. Top with a layer of chopped onions, then salt and pepper.

Dot with butter and then sift flour over the layer. Repeat two more times so you have a total of three layers. Add milk to pretty much cover.

When we get to this point, the debate begins in the Cleaveland household: The Intrepid One likes the potatoes swimming in milk. He wants to consume the dish in a soup bowl. His brother would agree. I like a version that sits on the plate and doesn’t run into the other food.

Bake for about 30 minutes, checking often. As the potatoes brown on top, your kitchen will be filled with the aroma of onion and potatoes. Yum.