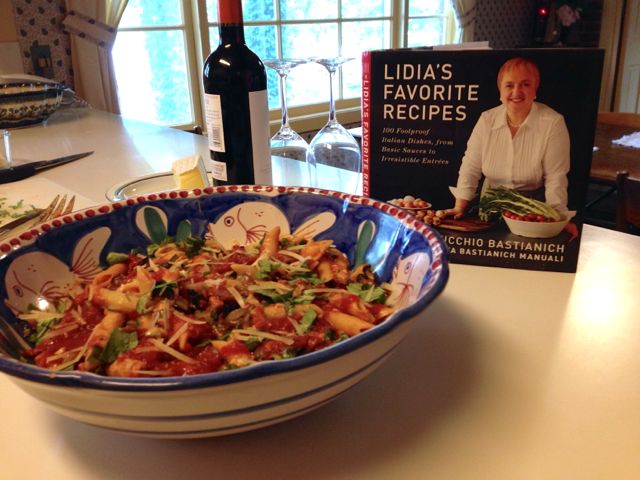 I hated eggplant for decades. Then my son Ruben made Eggplant Parmesan.

I tried it at home; I tried it at Italian restaurants in Seattle and Portland. I erased all bad memories associated with the eggplant of my youth.

About that time, my husband, David, started watching cooking shows Saturday afternoons on PBS. He liked Lidia Matticchio Bastianich’s go-to meals for her family so much that he ordered her book “Lidia’s Favorite Recipes.” We’ve made several dishes, most recently Ziti with Roasted Eggplant and Ricotta Cheese. The recipe serves six, but I cut it in half, as pictured above. I’ve served it when I’ve had vegetarian guests at the table with meat eaters, and it was a big hit for all.

So here is Lidia’s fabulous eggplant, which she discovered in Palermo, Sicily, while doing research for one of her cookbooks:

2 large, firm eggplants (each about 3 inches in diameter and 1-1/4 pounds)

2 T coarse salt, plus more for cooking the pasta and seasoning the sauce

One 35-ounce can Italian plum tomatoes (preferable San Marzano), with their liquid, crushed by hand

Trim the stems from the eggplants. Remove strips of peel about 1-inch wide from the eggplants, leaving about half the peel intact. Cut the eggplants into 1-inch cubes, and toss in a large bowl with the 2 tablespoons salt. Dump into a colander, and let drain for 1 hour. Rinse the eggplant under cool running water, drain thoroughly, and pat dry.

Preheat the oven to 400 degrees F. Brush a baking sheet with half the olive oil. Turn the eggplant cubs onto the baking sheet, toss to coat with oil, and spread them out in an even layer. Bake until the eggplant is very tender and browned, about 25 minutes. Turn and stir the eggplant cubes gently once or twice during baking so they cook evenly.

Bring a large pot of salted water to a boil over high heat for the ziti.

Heat the remaining olive oil in a large skillet over medium heat. Scatter the garlic over the oil and cook, shaking the pan, until golden, about 3 minutes. Pour in the crushed tomatoes, add the pepper flakes, and season lightly with salt. Bring to a boil, then reduce the heat and simmer for 10 minutes.

Stir the ziti into the boiling water. Return to a boil, stirring frequently. Cook the pasta, semi-covered, stirring occasionally, until al dente, about 10 minutes.

Drain the pasta, and return it to the empty pot over low heat. Pour in about half of the sauce. Remove the pot from the heat, stir in 1/2 cup of the grated cheese and the basil. Toss in half of the roasted eggplant cubes and toss again, then add the ricotta by heaping teaspoonfuls, stirring it gently into the pasta; you want the ricotta to warm, but you do not want it to blend with the sauce completely.

Plate the pasta, and spoon the reserved sauce over each serving. Now add equal amounts of the remaining baked eggplant to the top of the pasta plates. Sprinkle with the remaining grated cheese and serve.

Until next we meet, happy times in the kitchen.