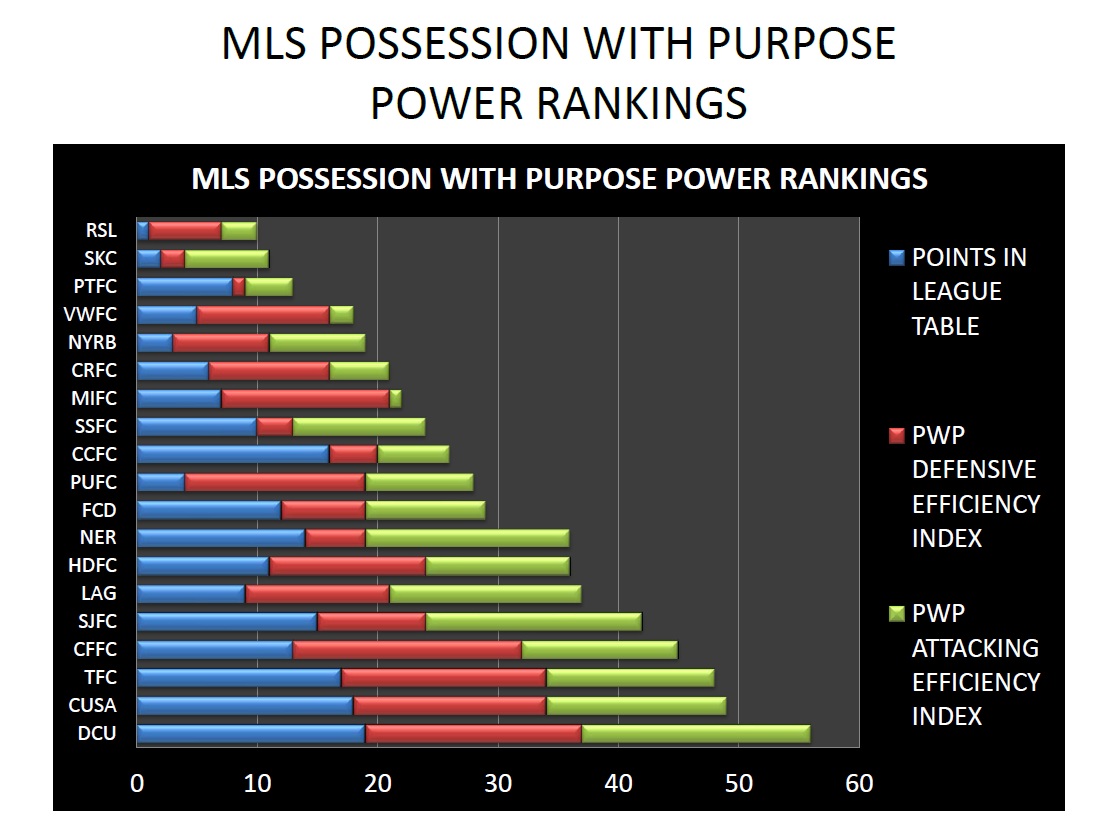 With the continued development of my Indices for PWP Attacking and Defending in the final third I’ve taken the opportunity to develop my first ever MLS PWP Power Rankings.

I will update these power rankings every week. 2.  It should come as no surprise that Real Salt Lake tops the table – they are in the top ten for all three categories used .

4.  The intrigue comes in as you work from number 2 to number 18; especially Philapdelphia.  At this point they are fourth in overall points yet they lag in attacking (15th) and defending (9th) in their final third.  For me this may be an indicator that of all teams in the Eastern Conference this is the one that is:

Luckiest – or – on the potential slide as the season winds down.  Granted they are fourth in overall points but Columbus has performed better on the pitch and Houston strengthens as the season gets tighter.

5.  LA Galaxy – Interesting where they stand in this power ranking total.  Clearly they have some top players – and what this ranking indicates to me is that apart from their top players they just don’t seem to be solid across the entire 11 like some other teams.

It should be noted, that until the purchase of Dempsey they were the highest spending team in MLS.  It Dempsey improves on pitch performance for Seattle their current 8th position could jump drastically in the closing 12-14 games.

So how does this Possession with Purpose Power Ranking stack up against the current Official MLS Power ranking?

Dead last is DC United in both polls; Chivas is second last – early agreement for the bottom feeders.

Things begin to change as you move from there.

The primary difference here probably has more to do with ’emotion’ than anything else – LA are no doubt a very dangerous team but when it comes to quality versus quantity this year they aren’t.  No-one-team creates more attacking activity in the final third with so few results to show for it.

Mixed in are Toronto and San Jose – both poor performers in the final third while Columbus (perhaps more lucky than good given how many red cards the opponent have had) are much higher in my power ranking.

With respect to Chicago; they recently signed a new midfield/forward to their team and in viewing statistical performance it is reasonable they would do that.  I would expect Chicago to move up the performance ladder, as should LA, given tighter game conditions.

Let’s not forget LA were somewhat in a swoon a bit earlier this time last year but their overall powerful performance, in the end, got them the Championship.

In looking at the top end – Real Salt Lake and Sporting KC head the better performing teams for both ranking systems; the third and beyond is where the differences begin to take shape.  But not by much; MLS has Colorado, New York, Portland and Vancouver all in the top 3-6 mix as does this power ranking indicator – emotions perhaps drive that but maybe – just maybe it’s more of the ‘what have you done for me lately view’?

Others battling for places in the final five for both conferences continue to juggle from week to week; Seattle hovers, as does Montreal, Houston, Philadelphia and Dallas.

While I’m not into predicting anything at this point my submittal for your consideration is that Philadelphia could drop a wee bit in the playoff race while Columbus might push forward.

I can also see Chicago improving with perhaps Montreal taking a back seat too.

Out in the wild-wild west — a telling battle amongst many strong teams will push the playoff race, in my view, to the very last game.  Seattle, Colorado, Vancouver, Portland, LA will probably all play second fiddle to Real Salt Lake unless there is a complete dropoff for the Saltines…  6 strong teams versus 5 playoff positions should make for some superb nationally televised games…

In closing – This is not intended to offer up that one Power Ranking has more or less value than another – information provided here is more statistical, based upon performances in the final third – that doesn’t include the midfield and all the influence going into that.