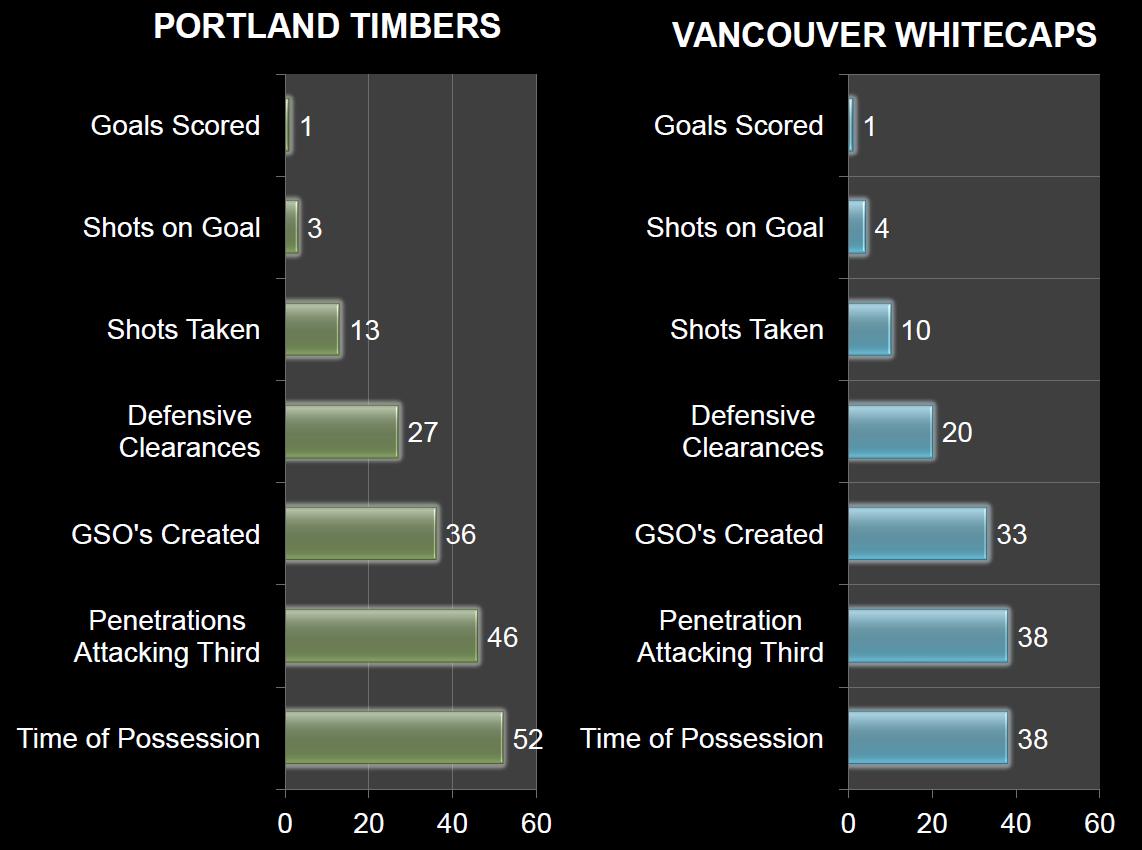 “We need to move on, we’ve got a big game on Wednesday, Open Cup game. Opportunity to, if we win, come back here to play for a trophy. And this group is going to be up for it, I’ll tell you that, just like they were up for it tonight.”

With that said and the mental quick turn that Caleb Porter wants to put to this game are there any trends or tendencies that might be gleaned from the outcome or the activities that (might?) have value as Portland prepares for a significant Cup Game in Rio-Tinto?

Observation #1 for your consideration… 2.  It would seem reasonable that the closer you get to your opponents goal the greater the pressure applied; therefore I would offer a stair step pattern is most likely an expected outcome.  What is surprising, at first glance, is that’s not the case with Vancouver.  So what about the other MLS teams this past weekend?

3.  13 out of 16 teams followed that pattern this past week in MLS with only three exceptions, Vancouver, DC United and Chicago Fire.  All appeared to meet or increase their passing accuracy in the attacking third compared to the attacking half, DC United got three points, Chicago Fire got three points and Vancouver (who actually tied the accuracy % from the 1/2 to the 1/3) got one point.

Here’s that diagram for your consideration… 4.   Not enough data to draw any conclusions but something to watch a bit more closely as this season winds down.  And with Real Salt Lake being a team with high possession rates it should be expected that their accuracy within the attacking third will be pretty high – therefore pressure in the midfield will be crucial to cutting down chances in the attacking third.

5.  Overall, if necessary I may weave this analytical approach into my possession with purpose pyramid as it may present a more simplified way to collect data as opposed to my having to hand collect penetrations myself.  More later on correlations and how this fits along with Defensive Clearances, Shots Taken, Shots on Goal, Goals Scored and Points in the League Table.

6.  By the way, another guy tracking penetrating and passing in the attacking third is Ben Pugsley, over in Barcelona, who writes for the Manchester City SB Nation and also offers up thoughts on http://www.statsbomb.com/

7.  Finally, my initial source to gain access to this info came from Harrison Crow who writes at http://americansocceranalysis.wordpress.com/  His article, written about 2 weeks ago http://americansocceranalysis.wordpress.com/2013/07/29/mls-attacking-third/ put me on to the Golazo web-site: https://golazo.mlssoccer.com/matches .  By the way, I joined Harrison Crow, Drew Olsen and Matthias Kullowatz on a Podcast yesterday, and as soon as I get notified it’s posted I offer it up for your consideration.  In the podcast we talked possession, passing and a number of other tidbits to include a closing thought on Kris Boyd!

Observation #2 for your consideration… POSSESSION WITH PURPOSE OUTPUTS FOR PTFC IN HOME GAMES THIS YEAR

2.  The most telling indicator to me in this diagram is the pattern with respect to the opponents Defensive Clearances; the more defensive clearances the opponent has the more likely Portland was to draw or drop three points.

3.  That pattern might also hold when looking at Shots Taken but for me the difference is not as apparent.

4.  In looking at that info I got to thinking if there was some other event going on that might be an indicator on why fewer defensive clearances result in more wins for Portland.

5.  My gut tells me that a team who has more defensive clearances is playing tighter in their defending third (distance from the midfield players to the back-four).

6.  If this is the case (parking the bus so-to-speak) are there any attacking statistics that might be used to indicate what Portland might be doing to penetrate those walls?

7.  I decided to take a look at the number of ‘through balls’ that Portland has offered up in their home games in the past to see if Portland might find a way to penetrate behind the opponent as opposed to playing sideways much of the time.

8.  Here’s the diagram from that OPTA data pull for Defensive Clearances and the numbers of Through-balls Portland has made in those corresponding home games… OPPONENT DEFENSIVE CLEARANCES VERSUS PORTLAND THROUGH BALLS HOME GAMES ONLY

1.  Note that in two cases (games against Vancouver last night and the game against Montreal) OPTA did not chart one through ball for Portland.

2.  Apart from that fast paced game to start the season against New York  (three – three draw) Portland have offered up at least one through ball per game and had 11 through balls in the three nil win against Chivas, 5 in the 2-1 win versus LA Galaxy and 4 in the 2-nil win against Houston.

3.  Another interesting point is that the two teams who seemed to park the deepest and tightest were Montreal and New England… both did very well in clearing the ball out of their area.

5.  For me this is relevant enough to be food for thought as the season continues; with Real Salt Lake playing at home and being a possession based team it is not likely that they will be playing a deep and tightly packed midfield and back-four; the opportunities for through balls might well present themselves in a game like this for Portland.

Observation #3 for your consideration…

What got Portland this weekend was defending the set-pieces (again).  According to MLS recaps that is four out of the last five games where a set-piece led to an opponent goal.

Hindsight might not be fair in this case but that’s four potential points dropped in the last 5 games because of poor defending on set-pieces.

“If” Portland has those four points that puts them on 39 points instead of 35 points.

However viewed, clearly this team needs to improve on defending set-pieces; it’s brutal to rely on hindsight to say a team could have more points than what they are currently on but it is what it is… set-piece goals are brutal and they can/will impact that outcome of a game and points in the league table…

Any and all are welcome to join the Possession with Purpose Portland Timbers facebook group.

Complete quotes from Caleb Porter on the game last night…

Overall thoughts on the game:

“We’re obviously disappointed in the draw. For me, the fact that we are so disappointed says everything about how far we’ve come as a club, and the culture we’ve created and the standards that we have, that literally we take the field with this group of guys and we expect to win every game we play. If we don’t win, we’re not happy, we’re not pleased. I thought, honestly, from a mentality standpoint, from an energy standpoint, (it was) one of our best games of the year. Games at this level, especially when you got two good teams with a lot at stake, they’re like it was tonight. This is how games are. They’re tight, it’s a battle, it’s chippy, there’s not a lot of rhythm. But in saying that, we were, in my opinion, clearly the better team. We had better chances. They had very little from the run of play. We had 57 percent possession, so that shows we were the deciding team for most of the game. But you have to give them credit. [Vancouver] came in here, they fought hard. Clearly their plan was to chop the game up. It fit the way the game went in terms of the officiating, the way the game was called, I thought it helped them. But in the end, I thought we did enough to win the game and played well enough. If we continue to play the way we did tonight, we continue to show the fight, the focus and the mentality we had tonight, we’re going to be in good shape. We need to move on, we’ve got a big game on Wednesday, Open Cup game. Opportunity to, if we win, come back here to play for a trophy. And this group is going to be up for it, I’ll tell you that, just like they were up for it tonight.”

On some of the chances that were created:
“I thought we were better. Again, we’re creating chances, a great goal. Valeri to Ryan Johnson, good finish there, that’s the chance he missed in the San Jose game, so credit to him. Games at this level, when you got two good teams, they’re going to be like this. You see it every week, especially as it gets closer and closer to the end of the year, as it gets to the playoffs, teams don’t play as open and they don’t gamble quite as much. Like I said, they’re just trying to pinch the game, they’re not trying to control the game. They clearly came in here to try and pinch the game, pinch a result, and fair enough, they did. They got a point. But we make the play on the corner, it’s a 1-0 game. Again, I think even though it was a tight game, even though this was, for me, a typical MLS game, a playoff-type game, end of the year where teams are playing for playoffs, that’s a 1-0 win if we make a play on the corner kick.”

On the team’s reaction to the draw and maturity of the club:
“They’re not happy [with the draw]. It’s not that they have to rant and rave. We have a very mature team in that regard. We don’t get emotional. We have passion, certainly we have intensity. This team is mentally tough. You can just tell. They weren’t down, like I’ve seen some teams that don’t have the right mentality. This team, they’re professional. They’re mature, they stay level-headed.”