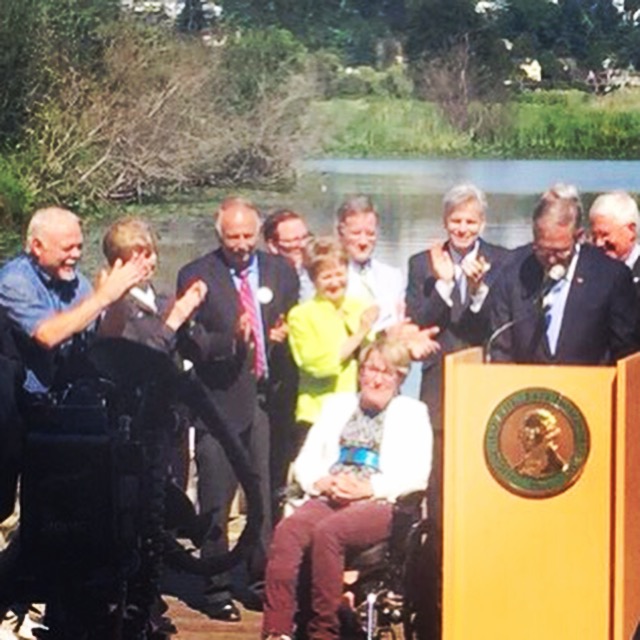 A Democratic staffer who works in Olympia sent me an email last week, asking if I knew why Sen. Don Benton, R-Vancouver, was at the signing ceremony for the transportation package.

A press release made it sound like Benton was going to march up to Seattle and give Gov. Jay Inslee a piece of his mind about the nearly 12-cent tax increase.

The press release was titled, “Benton calls out governor for expensive gas-tax hike.”

But as we reported last week, it didn’t appear Benton said anything to the governor. Instead, he was captured in a series of photographs grinning and applauding.

It’s not the first time Benton has shown up for a ribbon-cutting type ceremony for a policy he opposed.

Eric Florip reported last year about Benton’s appearance at a ceremony marking the end of the Salmon Creek Interchange Project. A project Benton voted not to fund.

But as Jim Camden recently wrote, the most recent example might set a new standard for chutzpah.

“His strident opposition wasn’t a surprise,” Camden wrote. “Benton voted against all three (transportation) bills, with a four-minute denunciation of the gas tax and the lack of reforms during the final debate. But it was worth tuning in to TVW to see if he’d be picketing the ceremony in sackcloth and ashes, carrying a placard inscribed “Woe is Us!”

I reached out to Benton’s spokeswoman (Carrie Shaw) a couple of tmies to find out why he attended the signing ceremony if it wasn’t to criticize the package.

I never heard back.

I sent the political staffer the press release from Benton’s office.

And I forwarded the information from the governor’s office when I asked whether the governor chatted with Benton.

“Benton was there. Didn’t say anything. Just smiled for the photos!” Inslee’s spokeswoman wrote in an email.