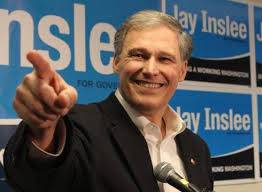 Gov. Jay Inslee holds a press conference in support of the Columbia River Crossing after meeting with business leaders at the Vancouver Community Library on March 22, 2013. (Zachary Kaufman/The Columbian)

Gov. Jay Inslee won’t officially unveil his 2015-17 budget until Thursday, but each day next week he’ll build up to the final reveal.

His staff has already dropped some big hints: the governor wants to raise taxes to the tune of $1 billion.

The governor’s budget guru David Schumacher told reporters, according to the Spokesman-Review, new taxes are necessary.

And remember the voter-approved Initiative 1351 passed in November that aims to shrink class sizes? Inslee’s budget reportedly won’t carve out funding for that measure.

In October the governor told the Bremerton Chamber of Commerce:
“There are nearly 1 million more people in our state today than there were in 2001. That means more students in our public schools, more people driving on our roads and bridges, more slots needed at our colleges and universities, and more people suffering from mental illness who need help,” according to a news release,” Inslee said, according to a news release.
“We’ve been limping along, in part by cutting vital services and deferring important investments. But that is the equivalent of a bubble gum and duct tape policy for the state of Washington.”

The governor will kick off next week by releasing details of his education plan on Monday.
The state Legislature will battle this upcoming session on how to adequately fund the state’s public schools and meet the supreme court’s requirement that they do so. This will be the first look at the governor’s plan.

On Wednesday, I would wager it will be the “green governor’s” favorite day, when he will talk about his ideas to reduce carbon pollution and clean energy jobs.

And finally, on Thursday he will reveal the whole budget.