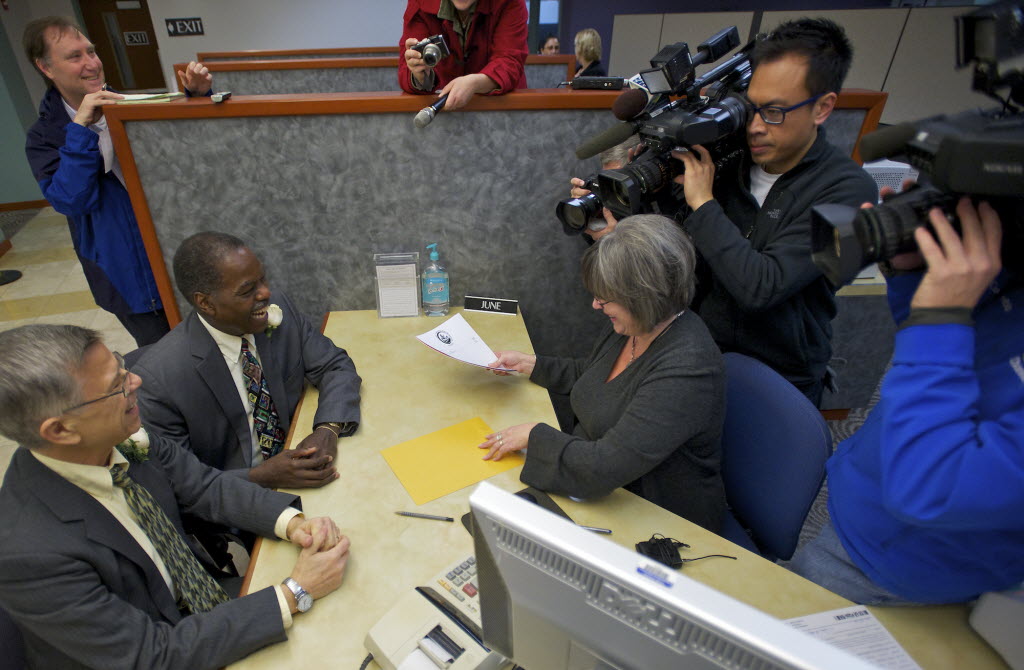 Paul Harris, seated second from left, and his longtime partner, James Griener, are the first same-sex couple to receive a marriage license in the county at the Clark County Auditor’s Office on Dec. 6, 2012. (Zachary Kaufman/The Columbian)

Paul Harris, recording manager at the Clark County Auditor’s Office, spent years watching straight couples file marriage applications, but it wasn’t until last December that he could do the same with his longtime partner, James Griener.

On Dec. 6, 2012, before television cameras, onlookers and reporters, Harris and Griener were the first same-sex couple to file their marriage application in Clark County. Now, Harris is helping push a law in Oregon that would allow same-sex couples to marry, too.

The organization is working to get a measure on the 2014 ballot that would make same-sex marriages in Oregon legal. Washington voters approved a similar ballot measure in November 2012. The email Harris sent out to Oregon United’s email lists asked supporters to donate to the cause.

“Over the years, I have issued thousands of marriage licenses to loving and committed couples no different from my partner (and me),” Harris wrote. “Well, there was one difference. James and I were legally barred from being able to marry.”

Harris is not the same Paul Harris who serves as state representative for the 17th Legislative District.