Are transportation projects twice as expensive in Washington state? Maybe. 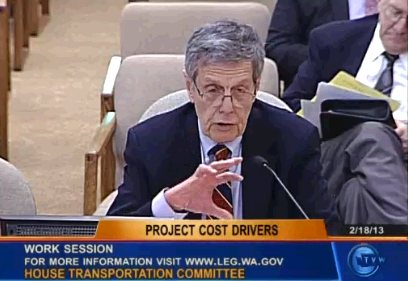 As recent as last week, state Rep. Ed Orcutt, ranking Republican on the House Transportation Committee, used the same figure while advocating for cost-cutting reforms. But where does that information come from? “If there’s a national problem (with cost), is Washington state’s problem even worse?” Eager said. “My answer to that is, maybe it’s worse.”

Eager and his colleagues studied three Puget Sound transportation projects: the Alaskan Way Viaduct replacement, the state Highway 520 floating bridge, and Interstate 405 toll lanes. Those project’s costs were significantly higher when compared to similar projects in other parts of the country.

In all, the study included 26 of the 50 states, and projects dating back as far as 2002. Eager said his study comes with a disclaimer.

“We don’t want to say this proves that the costs are worse for (the Washington State Department of Transportation), because you can pick any single project and argue, well it’s different,” Eager said. “I’m sure that (WSDOT) would say that this is risky because each project is unique … and I’d have to agree with that.”

“In looking at this large number of projects, there was a pattern, and the pattern was that with few exceptions (WSDOT) always came out on top, at the highest end of the cost,” he said.

You can watch Eager’s testimony here, and read the handout he submitted to the committee here.

House Republicans say more reliable information will be available once the results of a state-mandated cost driver study come out early next year. That study will examine the transportation regulations that could drive up project costs, as well as how Washington state compares to others in the U.S.