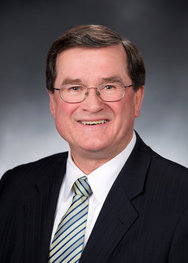 During the Legislature’s off-season, state Sen. Curtis King will travel the state and beat the drum for transportation reforms and the need to pass a transportation package. King, R-Yakima, announced a public tour around Washington, and one of his stops is in Vancouver on Sept. 24. He’s hoping to talk transportation after the Legislature failed this year to pass a transportation plan that would have paid for many new projects in the state.

King also sent a letter to state Transportation Secretary Lynn Peterson that outlined why he thinks the transportation package failed this year. He blamed media reports about problems at the Washington Department of Transportation, public opposition to raising the gas tax, and Clark County’s own Columbia River Crossing project.

“The governor’s insistence on including the CRC with light rail in the revenue package … provided the death blow to the entire package,” King wrote to Peterson. King also invited WSDOT officials to join him on his tour of the state.

“Before we go to people asking for more money, the state needs to prove that it’s already stretching every dollar with minimal impact to other areas of the budget,” King said in an announcement. “It’s our intention to discuss those ideas with DOT and the public at these meetings.”

Since the transportation package died, legislators from both side of the aisle and the governor have been trying to explain their side of the story about why it failed.

Republicans in the Senate’s Majority Coalition Caucus say that although they didn’t like the package House Democrats put together, the transportation package failed in part because the House didn’t pass a bonding bill that was part of the package. Democrats counter that it passed the parts of the package it needed to, and that the bonding bill could have been passed in the next year or two without delaying any of the transportation projects.

Gov. Jay Inslee said on a recent trip to Vancouver that the CRC was not the reason the transportation package failed. He said the Senate Republicans weren’t willing to negotiate.

Regardless, both sides seem willing to regroup and work on a new plan. Some of the reforms King proposed in his announcement might not sit well with Democrats, including the idea to re-examine the state’s prevailing wage law. That law sets required wages for construction workers who are hired for public works projects, such as building roads.

Inslee’s spokesman David Postman said Thursday that the governor takes King’s letter to Peterson “as a good sign.” He also said other legislators have expressed willingness to come back for another special session that would focus on a transportation package.

More details about King’s visit to Vancouver have yet to be announced.