Fort Vancouver baseball celebrates its past and future 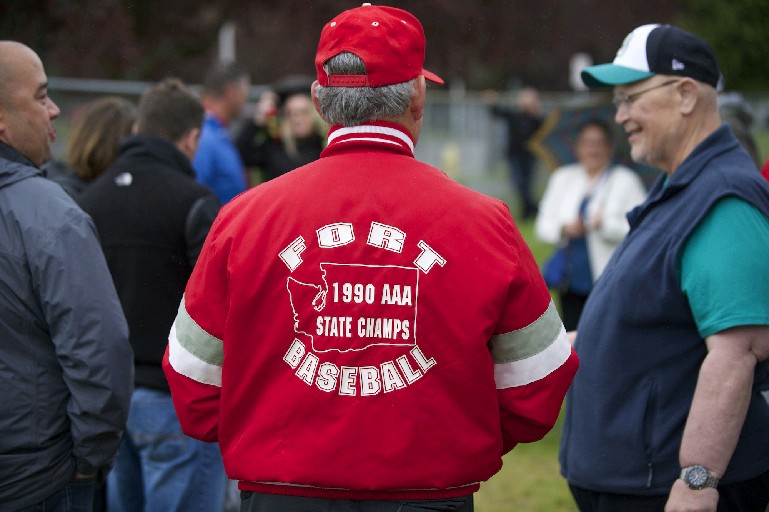 The Fort Vancouver baseball program celebrated its past and gave its present-day players a glimpse into their future.

No, nobody is predicting this Fort Vancouver team will win a state championship like the 1990 Trappers did. But coach Owen Frasier said it is very possible that today’s players will one day be able to succeed in life the way many of the 1990 players have succeeded in their lives.

Members of the 1990 championship team were on the field Tuesday for a short ceremony, celebrating the title. Frasier, though, also wanted to celebrate the next 25 years by showing today’s Trappers the type of men the 1990 guys have become. There is a civil engineer. A national salesman. A lawyer. A coach. Family men.

“I wanted them to see the correlation of how hard they worked in high school … and here they are as huge successes in life as husbands and fathers,” Frasier said.

All the things associated with becoming a great sports program will help one succeed in life, Frasier noted.

“For them to see that was huge,” he said.

Plus, let’s face it, many sports at Fort Vancouver have been struggling in the recent past. Having the 1990 Trappers on the field shows the 2015 squad that it can be done.

“I wanted them to see. Here’s some guys who came from Fort Vancouver High School, who live in your area, and they did something,” Frasier said.

Rick Harrington, the coach of the 1990 Trappers, threw out the ceremonial first pitch. It was a strike, Frasier said.

(Full disclosure: Rick Harrington is so experienced that he coached me in football in the 1980s at David Douglas HS in Portland.) Anyway, here is a list of the 1990 Fort Vancouver Trappers who were there Tuesday, as well as what they are doing nowadays:

Eddie Dyment, third baseman. Now a proud husband to Brandi and father of two daughters, Kimi and Sumi. He is a global account manager for CEVA Logistics.

Josh Baldwin, catcher/designated hitter. Now a father to Della. Lives in Portland but works as civil engineer in Vancouver.