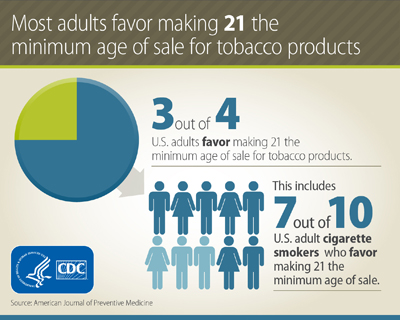 The majority of smokers and nonsmokers in a recent survey agree: the smoking age should be raised.

According to a Centers for Disease Control and Prevention article, 75 percent of American adults favor raising the minimum age of sale for all tobacco products to 21.

That includes about 70 percent of current smokers surveyed, 75 percent of former smokers and about 78 percent of never smokers, according to the article. About 11 percent of adults strongly opposed making 21 the legal age of sale, while 14 percent were somewhat opposed, according to the article.

“Raising the minimum age of sale to 21 could benefit the health of Americans in several ways,” said Brian King, acting Deputy Director for Research Translation in CDC’s Office on Smoking and Health, in a news release. “It could delay the age of first experimenting with tobacco, reducing the likelihood of transitioning to regular use and increasing the likelihood that those who do become regular users can quit.”

Several cities and counties across the U.S. have adopted laws to raise the minimum age to 21, as well, according to the news release.