Vancouver’s missing mayor: The tale of the I-5 Bridge ghost 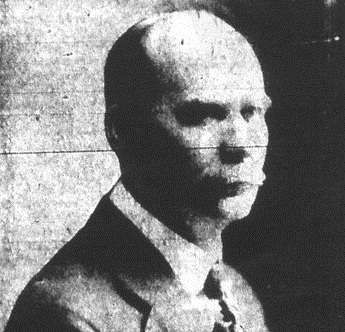 This tale was part of a larger story on ghosts in downtown Vancouver:

Winter’s chill was just setting in on the drizzly October morning when former Vancouver mayor Grover R. Percival told his wife he was heading out for a long walk. It was the last day of his term that Sunday, Oct. 17, 1920, and a seemingly relaxed Percival had decided not to run again after his one-term stint.

That morning, he strolled across the relatively new Interstate 5 Bridge, then called the Interstate Bridge, which opened on Feb. 14, 1917. Prior to becoming mayor in 1918, he supported the bridge project as a city councilor, something that caused the same controversies back then as the modern CRC project has caused over the past decade.

Later on the cold, rainy morning, Percival was seen wandering back over the bridge to Vancouver, then over to Seventh Street at around 11 a.m.

He wasn’t seen again until 3 p.m., when he briefly appeared on 26th Street, still ambling along at a leisurely pace.

After that, nobody saw him at all.

Not the next day, when a victorious John P. Kiggins celebrated the start of his second of four non-consecutive terms as mayor. Not a week later. Not even a month later.

“That was the great mystery of the day,” said Pat Jollota, a Vancouver author, history buff and former city council member. “He was seen downtown tipping his hat, and then he just disappeared.”

On Monday, Oct. 18, all the downtown stores closed at 1 p.m. A group of 285 Vancouver businessmen, divided into 18 search parties, hit the streets searching for the missing mayor.

They found nothing but a handful of false leads.

“It would be just like we finished building the CRC and then the mayor disappeared,” Jollota said. Percival talks to World War I veterans in Vancouver.

It wasn’t until Nov. 22, long after the trail had gone cold, that Portlander O.F. Williams decided to take a shortcut through the wilderness on his way home from the Kenton neighborhood. There, “in a clump of trees about 100 yards from the Oregon approach to the Northbank railroad bridge,” Williams found Percival’s body hanging from a tree, said a report in The Evening Columbian.

“According to those who saw the body, there is every reason to believe that Mr. Percival took his own life. His personal papers and some jewelry and some money were still on his body,” the story said.

But that conclusion has never sat quite right with Jollota, she said.

“What if he didn’t kill himself,” she said. “I’ve wondered for some time if he was, indeed, murdered.”

The night before he vanished, Percival attended a port commission meeting “and seemed somewhat nervous,” an Oct. 17 story in The Evening Columbian said.

But his finances were in order, he wasn’t depressed about the election because he wasn’t a candidate, and he seemed to be looking forward to returning to his successful insurance business, Jollota said.

“He was seen in a good mood on the day he vanished,” Jollota said.

Still, after the grisly discovery, “no inquest was held over the body as it was obvious that Mr. Percival had taken his own life,” a Nov. 23 story in The Evening Columbian said.

Percival was buried in Park Hill Cemetery on Nov. 24, 1920. But his story doesn’t end there.

A shadow of the past

“The story goes that people will be driving across the bridge at night, and they’ll see this tall, slender man walking in period clothing,” said Brad Richardson, a historian and volunteer services coordinator with the Clark County Historical Museum. “It’s always on fall nights, and it’s always on the old (parts) of the bridge.” Richardson, who will lead the museum’s Haunted Walking Tours in downtown Vancouver throughout this month, said he’s fairly certain that if the stories are true, that man is the ghost of Mayor Percival.

And he’s not alone.

“Many people have reported seeing the figure of a well-dressed man walking on the Interstate Bridge in downtown Vancouver. He appears in a solid form but then vanishes instantly. Researchers believe the ghost is the spirit of Grover R. Percival,” the book reads.

“On some autumn evenings, a tall slender man wearing a black overcoat and felt hat has been seen walking south along the Interstate Bridge — and disappearing,” he wrote. “His death was declared a suicide. However there was no known reason for him to take his own life. Although there were rumors of foul play for political purposes, nothing was ever proven.”