Are we fair-weather fans? 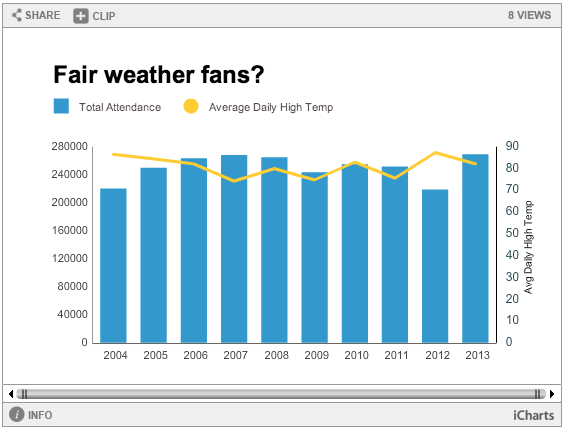 When the Clark County Fair experiences a jump or decline in attendance, officials typically point to the weather as one of the main factors, but I’ve often wondered are we really fair-weather fans?

The answer is yes, but after looking at attendance figures and average daily temperatures for the past 10 years (from the National Climatic Data Center) I’d argue that hot weather seems to have more of an effect than cooler weather.

Looking at the past 10 years of attendance figures, I’d say we like the temperature to be in the low 80s and about half the time Mother Nature delivers. The median daily temperature for the past 10 fairs is 82.2 (this year’s average daily high). The tipping point, when we start to wilt, appears to be about 87 degrees. That’s about how hot it was on average last year and in 2004, the two years with the lowest attendance by far in the past decade. If it gets that hot, we stay home or find cooler ways to spend a sunny day in August than letting the sweat pour from our brows while we watch the monster trucks like I did with my family on the last day of the fair in 2012 (for the record, the mercury hit 94 that day).

This all has me wondering where the tipping point is on the lower end of the thermometer. At what point would attendance decline as much as it does when it averages 87? Any guesses?