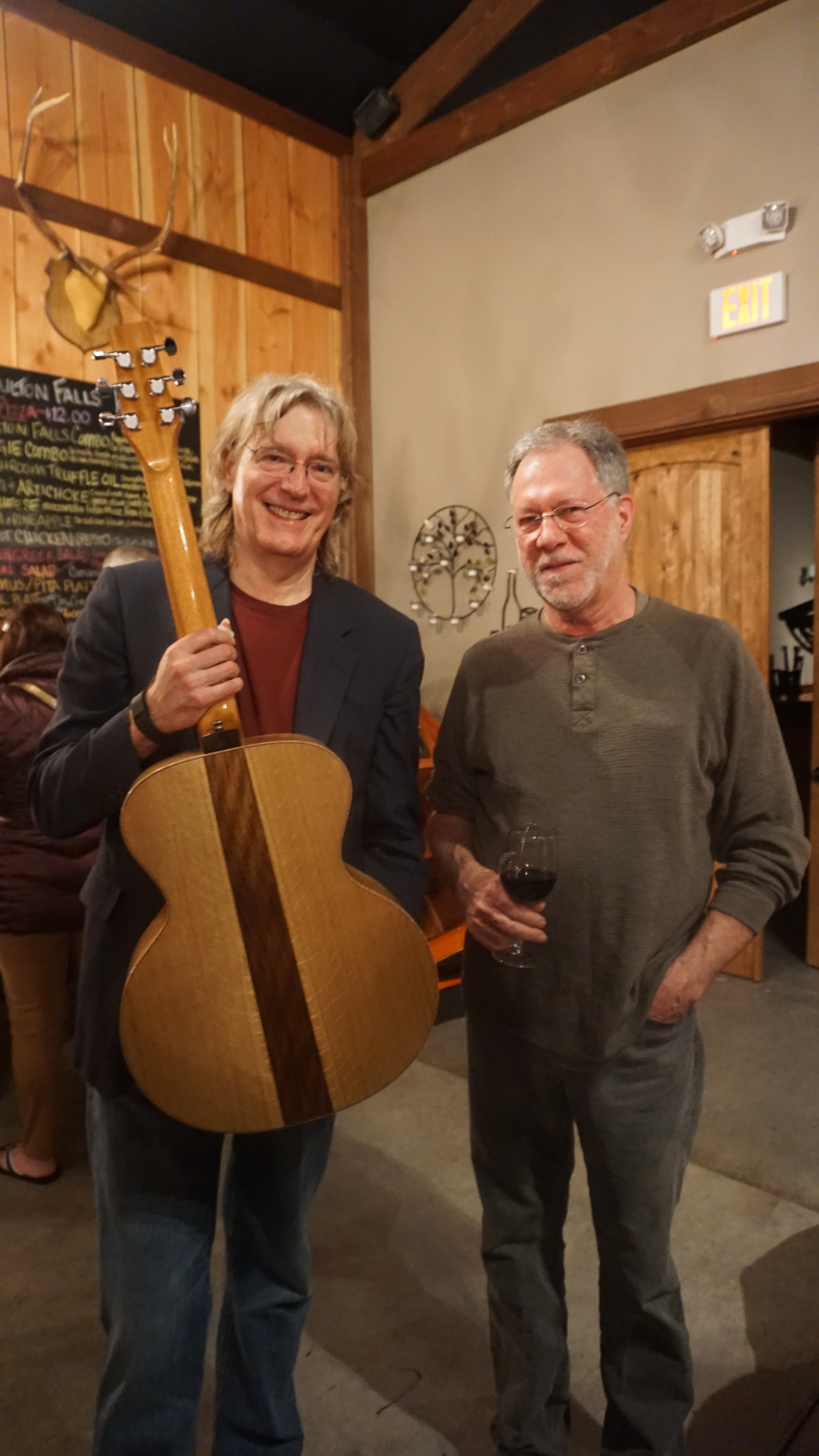 Grammy award-winning guitarist, Doug Smith, tends to draw a crowd whenever he plays but last night, at Yacolt’s Moulton Falls Winery, it was nearly standing room only.

His performance began at 6 pm and, while the fans enjoyed everything he strummed, they went crazy when he deftly bridged the much-requested Malaguena into Misionera, proving how he earned the Winfield International Fingerstyle Competition in 2006.

Another highlight was when his wife, Judy Koch Smith, accompanied him on flute with a mesmerizing rendition of Stairway to Heaven. But the reason I was there began just before 8 pm—the debut of a one-of-a-kind, small jumbo acoustic guitar made by another area musician who’s also an accomplished luthier. Loren Schulte recently completed his second guitar made with or accented by oak staves procured from North County vintners. His first one, custom-made for Gougér Cellars Winery, was finished for Gary Gougér in 2015.

This most recent guitar was delivered to Joe Millea, owner of Moulton Falls, just yesterday and Schulte was on pins and needles to have Smith be the musician to strum this gorgeous six-string. Crafted with curly maple, Adirondack spruce, Honduras mahogany, Mexican ebony, Macassar ebony and Gabon ebony, the back centerpiece is accented with an oak stave. I felt an air of anticipation as we all awaited how the master would react to Schulte’s creation. In his capable hands, the piece came to life. As his fingers worked up and down the fretboard, he had such a contagious smile on his face you couldn’t help get sucked into the nearly Kumbaya moment that came over the entire tasting room.

According to Schulte, oak is a wonderful tone wood and, although, this particular one, sports only one stave, it’s a remarkable accent piece. Millea intends to showcase his new treasure at a concert being put together for a date yet to be determined in April when upwards of 12 different guitarists will help break in this beautiful instrument.

To read more about both of these guitars and the humble luthier behind them, check out the story in an upcoming issue of Oregon Wine Press.