Grape stomping: From tradition to technology 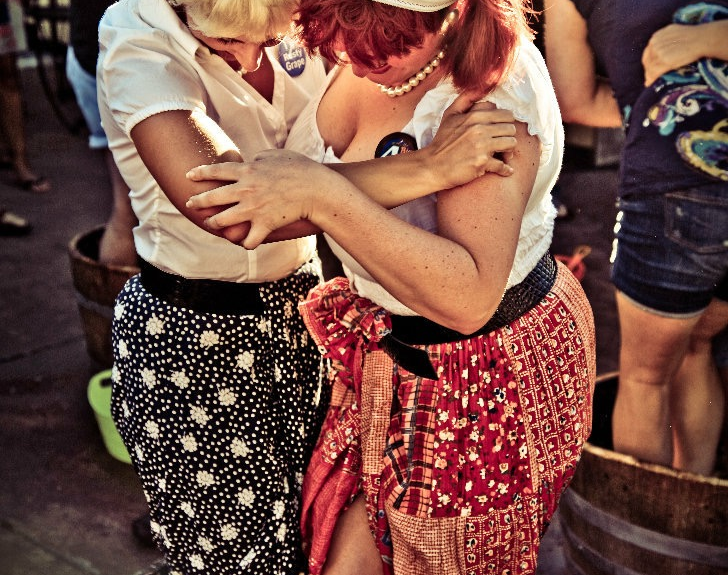 Even millennials know of the famous I Love Lucy grape stomping episode thanks to classic television stations and YouTube. My personal favorite, however, is definitely Keanu Reeves and Aitana Sánchez-Gijón in the slightly cheesy 1995 A Walk in the Clouds. With breathtaking Napa Valley in the background, ladies stomp around this huge vat with their dresses hiked up to here and gone until a group of men put Reaves in with his new bride and…cue the cheesy music.

To be honest, as dreamy as it all looks, it does not appear sanitary. Shoot, at one point the stunning Sánchez-Gijón wildly twirls her grape-soaked locks, causing me to think ‘Where’s your hairnet, woman?’

In truth, this was how it all began (possibly as far back as 5400 B.C.) and foot treading is actually still practiced for some high-end Ports but grape stomping for mass production occupied only a brief point in winemaking history. Keep in mind that Egyptian pyramids continue to be classified as engineering marvels so it stands to reason they devised a far more efficient juice-extracting method than feet in a barrel and illustrations have been uncovered showing workers using a cloth press in varying stages of advancement. Rusty Grape Vineyards co-owner, Jeremy Brown, caught up in the action at a past Stompfest, held every September since 2007. Teams compete to win a dinner party for 10 and bragging rights for best technique. Heather Brown

In Portugal, where Port producers are the last bastions of foot treading, the tradition stems from a hundreds-year-old history of workers coming together after the harvest to extract the flavor and color from the grapes in the gentlest way possible by kneading the fruit with their feet for up to four hours in lagares (shallow tanks made of stone or concrete). Small amounts of Vintage Port, which command the highest prices of this fortified wine, are still crafted in this fashion but since the entire bottle yield of Vintage accounts for approximately two percent of total Port production, it’s quite limited. Instead, even long-established Port houses have embraced the technological advances of robotic lagares introduced in the 1990’s using silicone pads to mimic the pressure of a human foot—one cleverly referred to as Port-Toes. Down Salem way, fruit was flying as entrants held their own for three minutes at the 25th Annual Willamette Valley Vineyards Grape Stomp Championship. Viki Eierdam

Grape stomping festivals continue to invoke the romance of the industry and draw contestants clad in Lucy-esque fashion to the delight of onlookers. Rusty Grape Vineyards, located in Battle Ground, Washington, has been hosting their successful Stompfest in September for nine years now where teams of two compete to win a dinner party for 10 and bragging rights for best technique. Halved oak barrels are set out on their family-friendly lawn and this years’ sunshine leant an even more festive feel to the celebration. House-made Sangria was featured and owners, Jeremy and Heather Brown, were on deck to chat with visitors and offer tank samples of their Recession Red prior to its October 4th release party. At Willamette Valley Vineyards in Salem teams of two (known as the stomper and the swabby) face off during a two-day event for a chance to win a trip to compete at the World Championship Grape Stomp held each October in Santa Rosa, California. Viki Eierdam

Down Salem way, Willamette Valley Vineyards ushered in the fall harvest with their 25th Annual Grape Stomp. Winners of this two-day event received a trip to compete at the World Championship Grape Stomp held each October in Santa Rosa, California (where the same couple has won this title eight times since 2004). Willamette Valley’s impressive estate consists of a recently-remodeled tasting room that showcases repurposed wood floors made from Port of Portland pallets, multiple fireplaces both indoors and out, a wall of windows that give way to expansive views, inviting outdoor seating and some genuinely friendly staff like my tasting guides, Lacey and Evan.