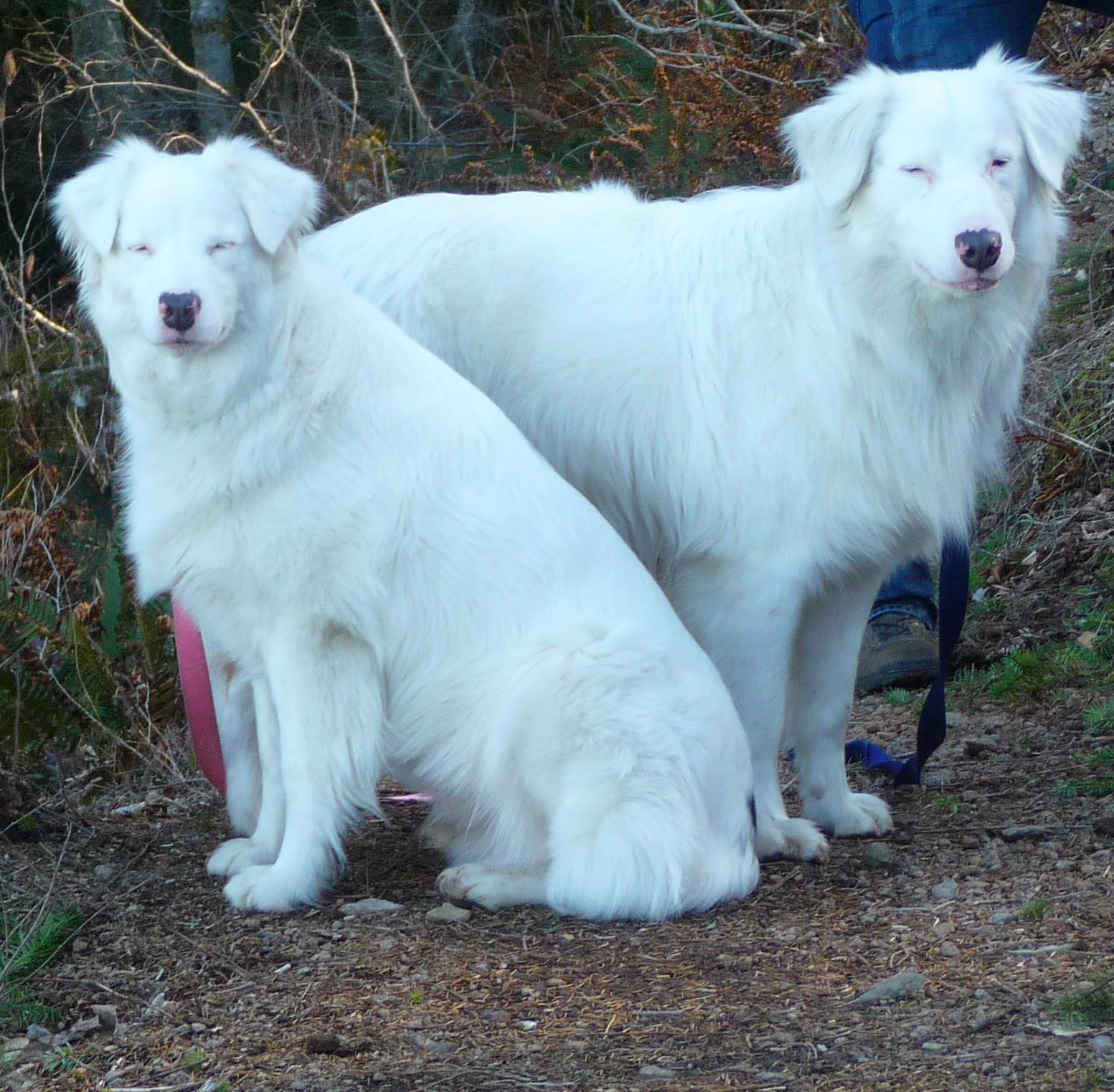 Baby Girl and Challenge – a filthy, mucky mess after scaling Dog Mountain in the Gorge.

Six months ago today my husband and I adopted two deaf and sight-impaired dogs from the SW Washington Humane Society that were estimated to be about five years old. They have nothing to do with wine (although they tend to go with us when we wine taste or lie on the patio while we’re enjoying a glass) but I thought it was time for an update.

Challenge and Baby Girl were found abandoned on a piece of property covered in muck and are double-merle Australian shepherds which means someone irresponsibly or unknowingly bred two merles together. When that happens, there’s a 25 percent chance the pup(s) will be deaf and/or sight-impaired or blind. That’s too high for responsible breeders and the gene is detected through blood testing.

At the pound they were known as Charming and Snow (obviously fans of a certain T.V show). Time has taught us (and the 4th of July weekend confirmed) that these dogs are, in fact, deaf. Baby Girl can see better than Challenge though they are both able to see a few feet in front of them. It’s funny, though, to watch these two. They compensate so well with their other senses that I’m lulled into this false sense that they see quite well…until Challenge meets a blue recycling bin at full speed with his face or the two of them startle each other in the back yard. I swear sometimes they think we adopted a third dog.

Sadly, Challenge does not like other dogs and Baby startles easily. Unfortunately, due to the complete lack of information about their first five years, we don’t know what caused these behaviors because a lot of other double merles are happy-go-lucky around other animals and people. Challenge and Baby Girl on their first hike with us – Beacon Rock. FYI: A mostly scaffolding hike is not the best idea with sight-impaired dogs

Then, again, the college student who’s stayed with them during the two vacations we’ve been on since adopting them has had no problems with them. She says they’re wonderful and sends us pictures of them lounging in the grass on their daily walks. Dogs must be a lot like kids. They’re on their best behavior with other people.

So, here we are, six months later still finding out things about these two and realizing it’s not as easy as we’d hoped it’d be but the four of us have a lot of fun together. They both swang on a swing set and slid down some slides last night at a nearby playground and seemed to really like it (especially the swinging). In case anyone was wondering, yes, we do let them rest. Baby Girl and Challenge enjoying some R&R at Mt Hood Vineyards in June.

They like to hike but, judging from our adventure to the Yale Reservoir last week, neither one of them likes the water. Baby Girl enjoys burrowing under our young Japanese maple in the backyard while I weed clover from the grass or pick Marion berries.

Challenge loves his boy which makes me think he used to have one. He goes to the hardware store with Dan and they do guy things together in the garage. He can drag Challenge around like a rag doll and he just lops along all powerful and regal looking because he has his boy at his side. When he comes home from work, Challenge burrows into him and Dan just melts. It makes me smile and know that, even though it’s difficult and we’re having to adapt to their limitations, they’re good for us and we’re good for them and the rest we’ll figure out along the way.

If anyone wants to follow double merles on instagram, a couple good ones to check out are  #doublemerle or #deafdogsrock.