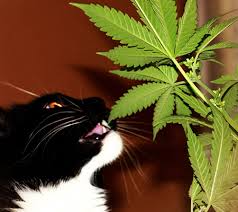 Due to the increased availability of both medical and recreational marijuana, as well as its use in foods, pills, oils and tinctures, marijuana is more accessible than ever before. It’s also stronger because new hybrids and cultivation techniques have resulted in plants with significantly more THC (Delta-9 Tetrahydrocannabinol, the psychoactive compound) than in decades past. It therefore poses an even greater threat to one’s cherished cat since THC and other cannabinoids affect the central nervous system, causing disruption of normal movement and behavior. The most common ways for cats to be exposed to marijuana is by inhaling its smoke or by ingesting the dried marijuana itself. Because of the cumulative effects of inhaling this smoke, cat owners who use marijuana, whether medical or recreational, should never smoke anywhere near their cats, particularly ones with asthma or any other lung diseases.

In some cases, cats may nibble on the leaves and/or buds of homegrown marijuana plants. Unthinking owners may also feed their cats cookies, brownies or candies infused with marijuana, posing a double threat to their health because anything containing chocolate or the artificial sweetener, xylitol, can lead to a double dose of toxicity. As with all products, plants and medications dangerous for pet consumption, cat owners using marijuana in any form should store it somewhere out of reach of curious noses and even more curious paws – in a tall shelf, cabinet or drawer with a child-proof lock. The use of a thick glass container with a twist-off lid provides additional security because even if kitty does discover it, the lid’s impossible to pry open.

The most common side effects of marijuana intoxication are dilated pupils, lack of coordination (falling over or walking “drunkenly”), sedation or lethargy, vomiting, urinary incontinence, and slow heart and respiratory rates. However, about 25 percent of those who have ingested THC become stimulated instead, with agitation, excessive vocalization and high heart rates being possible side effects. After ingestion, cats can become affected in minutes to hours, and signs can last for hours.

If you suspect your cat has ingested marijuana and is unable to walk or cannot be roused, contact your vet immediately. Know too that veterinarians are NOT required to contact the police, even in states where marijuana is illegal. What’s of utmost importance is getting your cat prompt medical assistance. Treatment for marijuana intoxication can include confinement in a kennel to prevent injury, intravenous fluids to keep her blood pressure normal and medications to lower her heart rate. Cats most severely affected may also benefit from intravenous lipid emulsions to help decrease the amount of cannabinoids circulating through their system.

The takeaway from this — keep a watchful eye on your cat if there’s marijuana around.