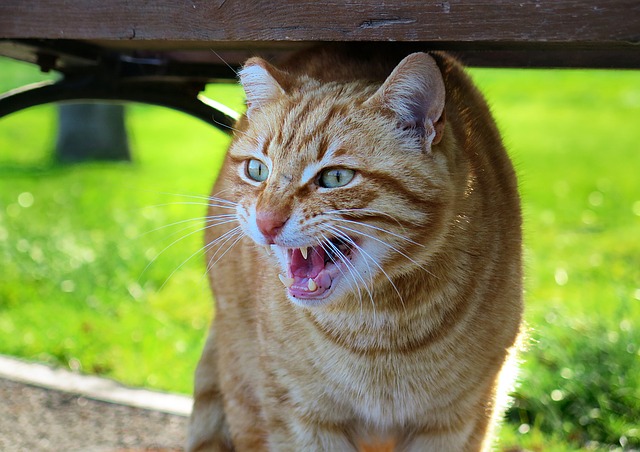 If yours is a multi-cat household, you may be all too familiar with kitty spats and scraps, squabbles and skirmishes. The origin of these feline fights rests firmly at the paws of the so-called “alpha cat”, the one who automatically seeks the highest spot in your home, demands to be fed first and will, at times, mark her territory. As the other kitties grow, so do their own alpha tendencies, spurring them to challenge the alpha cat’s self-appointed status and claims. In return, the alpha cat will engage any or all of them in active bouts of wrestling and tussling, rolling around and “rabbit kicking.” Fortunately, most battles between cats are mock battles. Careful observation of and familiarity with their body language will enable you to differentiate between kitty playing and kitty fighting. The key indicators are their tails, their ears and their eyes, and where their bodies are in relation to the ground. The first rule of refereeing a feline free-for-all? Never step in between two sparring spitfires. Since they’re focused solely on one another — not on you – with their stress pheromones at peak levels, you run the risk of being scratched or bitten.

Some cat behaviorists suggest making a sudden, loud noise from a concealed corner by either clapping your hands or banging on a pan. This will startle the cats, and in all likelihood, make them separate and scatter. Another tactic is to toss something soft — a pillow, for example – from a hidden spot to an area slightly removed from the squabble. Once again, this distraction may be sufficient to successfully end their dispute.

Others suggest setting a kitchen chair between the two combatants without hurting them. Although this takes patience and a gentle touch, it will startle the two feisty fighters and they will back away from each other. Take advantage of this “opening” and use a broom to guide one of them into another room and close the door.

Let some time pass, then slowly enter the room and studiously ignore the banished battler as you place a bowl of food, a bowl of water, and a litter pan on the floor. Then exit swiftly. Check in on her awhile later. Only when she’s grooming herself or calmly eating should you assume it’s safe to approach her. The second rule of refereeing? Never use a spray bottle filled with water as a way of stopping two truly fighting felines. So engrossed are they in their battle that a spritz or a stream of cold water won’t even start to cool them down. It may even have the opposite effect: frightening them and only making matters worse.

The third rule of referring? Never shout or scream in an effort to break up a full-blown cat fight. Because cats are highly sensitive creatures and react swiftly to their owners’ stress level, your anxiety and tension will only accelerate, not diminish, their own. Remaining calm in the face of their turbulence tends to work best.