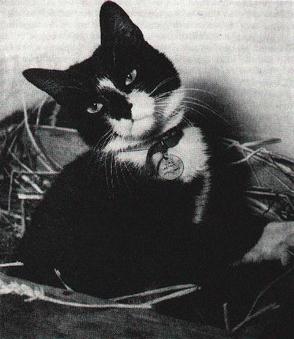 How often have cat guardians played second fiddle to dog owners when it comes to historical heroics? “Fur” too long. Whether on land or at sea, alongside soldiers or sailors, the following fabulous felines are more than worthy of merit. Tiddles: Born on the high seas aboard the British Royal Navy’s HMS Argus, this sleek, black “mouser” served on the HMS Victorious as the official Captain’s Cat. He lived his entire life on board various Royal Navy aircraft carriers, sailing more than 30,000 miles in the 1940’s. His favorite place to sit was the after capstan, where he could be found playing with the bell-rope. His fur-ever claim to fame? One of the paws-ible reasons that black cats are considered lucky in Great Britain. Pooli: Short for Princess Papule, the large, lush DSH was born on July 4, 1944 in the Navy yard at Pearl Harbor. She was brought on board the USS Fremont, an attack transport that was ultimately involved in battle at the Marianas, the Palau group, the Philippines, and Iwo Jima. Whenever she heard the “battle stations” alarm, she would race to the mailroom and curl up in a mail sack. Ironically, the main danger she faced was when the ship was heading home to San Francisco. Some of the sailors considered throwing her overboard for fear they would be quarantined because of her. But those who loved the kitty placed a round-the-clock guard on her for three days until the ship docked — without incident. Following the war, Pooli lived a long, happy life, and earned three service ribbons and four battle stars.

Salty: During World War II, sweet, striped Salty became a U.S. Coast Guard mascot at the San Diego Coast Guard Air Station in California. She inadvertently made her way into the history books by being the first cat to take part in a rescue mission. How? By stowing away on an amphibian reconnaissance plane with her kitten. They were both on board when the plane took off to rescue a pilot whose plane had come down at sea. Peebles: This plush ebony beauty was the master cat aboard the HMS Western Isles during World War II. Although his official duty was to keep the ship free of rodents that could chew through wiring and ropes, eat food rations and spread disease, his most valuable position was as on board entertainer. Highly intelligent and capable of performing a variety of tricks, he was known to “shake hands” with strangers who entered the wardroom and to “jump through the hoop” formed by his human’s arms. Able Seacat Simon: Purr-haps the most decorated cat in military history, Able Seacat Simon was found on a Hong Kong dock in 1948 by a British seaman who smuggled him aboard the HMS Amethyst. An extremely effective mouser with a penchant for leaving “presents” of dead rats in sailors’ beds, the crew loved the black and white cutie for his antics and for the way he boosted morale. He even made friends with Peggy, the ship’s dog. When the ship came under fire near Nanking, Simon, who was severely wounded by shrapnel, disappeared for eight days. After reappearing and being treated for his injuries, he resumed his duties, managing, despite his pain, to clear the ship of most of the rats that had thrived in his absence. That’s when the crew named him Able Seacat Simon — the first military title given to a cat, and he received three awards for his actions. Sadly, he passed away due to complications from his injuries, and was buried in Britain with full naval honors.

Private First Class Hammer: One night in 2004, a group of American soldiers stationed in Iraq were joined in their tent by a kitten born on their base. The plump, pale-eyed kitty remained with the army unit serving both as mouser and moral support for the soldiers. They, in turn, made him an honorary member of their unit, naming him Private First Class Hammer. Prior to their return to the U.S., and loath to leave their furry friend behind, Staff Sgt. Rick Bousfield wrote an impassioned letter to the rescue group, Alley Cat Allies. They were so moved by Pfc. Hammer’s story that they raised the money to have him transported Stateside where the members of his unit gave him a hero’s welcome. He lived in cozy contentment with the Bousfield family until his death in 2015.