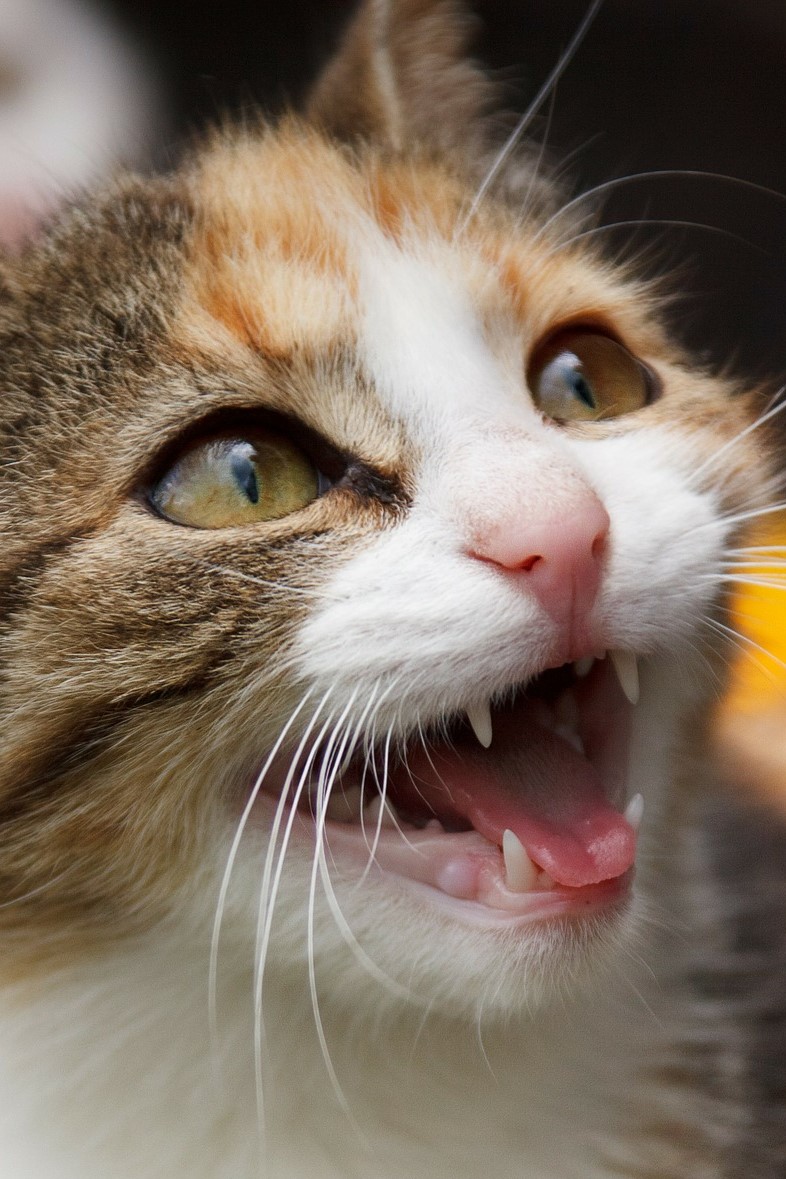 After birds, cats have the widest range of vocalizations of any domestic pet. They’re capable of making many distinct sounds with multiple variations of each – all indicative of their mood. Purr-haps the most common is an adult cat’s meow, first uttered when kittens as more of a “mew” when in need of their mother’s milk. Used solely to communicate with humans, a meowing cat usually wants something – food, attention, access to a room — or simply to say hi. Occasionally, a meow signals loneliness or even illness. Older cats may meow more due to failing senses. Rapid-fire meows demand your prompt attention, while longer, plaintive and throaty “meow-w-w-s” may indicate worry, annoyance or displeasure.

This pleasurable sound is a soft, deep, throaty rumble, made when cats are their most content – usually while nesting in their owners’ laps as they stroke them. In rare instances, purring indicates they’re concerned about something, especially if their ears are back and their bodies seems tense.

Learned as kittens, these birdlike utterances are more like declarations. Originally used by mothers to “tell” their offspring to pay attention and follow her, adult cat may chirp to get their owners’ attention or urge them to view something they deems vital. They may also emit little chirrups and trills when they’re especially happy and excited.

Cats often chatter their teeth while gazing longingly out the window at a bird or a squirrel. Sometimes accompanied by a chirp or a squeak, chattering is thought to indicate a cat’s predatory excitement and frustration at not being able to pursue that perceived prey. This unmistakable sound — like a steak sizzling on the grill — means a cat feels threatened. Add an arched back, puffed hair, twitchy tail, flattened ears and open mouth, and kitty is poised and ready to fight.

Often accompanying the hiss are random snarls and growls – another indicator of fear, anger or territorial threat (especially in outdoor cats). High pitched, starting or ending with a yowl, these sounds will be coupled with the classic defensive body posture of the hiss.

Resembling a long, drawn-out moan, it signals worry, discomfort, territorial concerns or mating issues (in roaming or outdoor cats). It can also occur when cats aren’t feeling well, when their senses or cognitive functions decline, or when they’re just bored.

Uttered by intact females in heat, this brief, plaintive, hollow-sounding version of a yowl is their seductive version of a “come hither” call to any and all prospective mates milling about nearby.

An ear-splitting sound released at the painful end of the mating process or after a fight, complete with paw swats or vicious bites, the near purr-fect solution to both of these issues is sterilizing your cats and keeping them safely indoors.