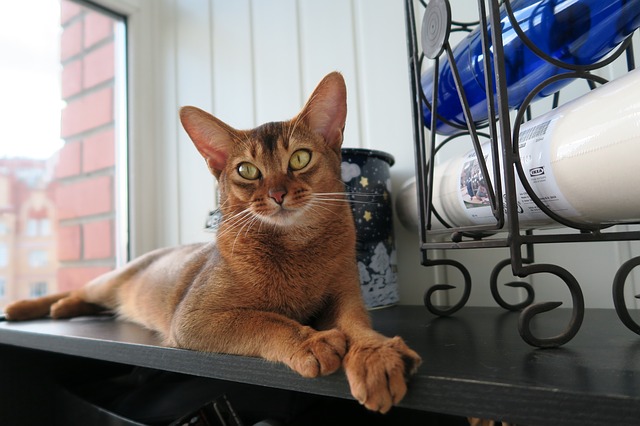 Not one to laze about, the Abyssinian keeps moving as she eagerly explores her indoor world. She’ll even allow herself to be leashed and walked by her owner if it means further investigation of the world outside. A great fan of both people and bird watching, adept at learning tricks, she much prefers playing to cuddling as her main form of social interaction.

True to her “wild cat” appearance, the sharp-brained Bengal thrives on activity. Whether she’s outdoors running, playing and watching the birds or indoors leaping from counters and “climbing the walls”, keeping this kitty mentally and physically stimulated is key to keeping her happy. Use a clicker to teach her tricks, join her in puzzle playing, and this attention seeker is purr-fectly content. Part African Serval, adventure comes as naturally to the Savannah as her curiosity, and thanks to her magnificent leaping skills, takes her to the highest places, be it the top of the refrigerator or the tallest shelf in the room. She also reigns supreme when it comes to socializing with her people, loyally and lovingly shadowing them and even accompanying them on walks if they leash her. Her head may be egg-shaped, but it’s certainly not empty. Extremely charming and exceedingly purr-sonable, the Cornish Rex relishes human attention and revels in tricks and puzzle games that involve both her and her devoted owner. She also LOVES being held, and with so little fur on her body, is winningly warm to the touch, making her the ultimate bed warmer on cold winter nights.

Both inquisitive and entertaining, the Balinese loves being involved in whatever her owner is doing as much as she loves performing tricks. Add a touch of naughtiness to her niceness, and her sense of humor will keep her human not only “ooh”-ing, but “ahh”-ing in wonder. Given her druthers, she would cuddle all day, every day while whispering sweet kitty nothings in her chosen person’s captive ear. Described as part monkey (due to her dexterity), part dog (due to her sociability), part child (due to her curiosity) and part cat (due to her intelligence and grace), the Sphynx is a sublime example of puss-in-boots purr-fection. Whether she’s defying gravity, mixing and mingling, exploring her world or showering her owner with love, she does it with elegance and poise.

Striking a splendid balance between social and solitary, the exotic Japanese Bobtail is one feline who fairly oozes confidence. Famously friendly and amazingly amiable, with a distinctive singsong “coo”, she’s exceptionally easy to train for performances in shows, and when she’s not nestling close to her owner for human companionship, she’s purr-fectly content to keep her own company.

Created, it seems, for mischief, the vividly colored Somali with her full, plumed tail and vixen-like cunning make her more fox than feline. With an insatiable curiosity that leaves no proverbial stone unturned, she navigates every nook and cranny of her inside world, wreaking havoc wherever she puts her paws. Fortunately, her good-natured sociability and easy lovability tip the scales in her favor.

Boundaries don’t exist for the perpetually curious and enduringly playful Burmese. The world is her oyster filled with wonders that demand exploration, while her owner’s her own best friend whose moods she can read like an open book. As trusting as she is teachable (tricks come easily to her), she’s also fabulous fun to be around and can, with little effort, turn even the grayest day sunny.

Addicted to admiration, the Singapura lives to be loved and to shine in the spotlight! Bristling with kittenish energy, this petite puss butts nosily into everyone’s business, earning her the title of “pesky people cat.” Known for her exceptional intelligence and effortless agility, she’s as nimble on her paws as she is at stealing hearts, making her endearingly lovable to those lucky enough to love her.