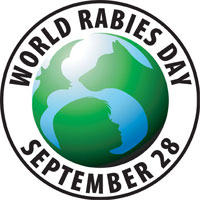 September 28th not only marks World Rabies Day, but the anniversary of the death of Louis Pasteur, the French chemist and microbiologist who developed the first rabies vaccine.

As a living virus, the goal of rabies is to infect, replicate and survive, and it typically enters a cat’s system by means of a bite from an infected animal. Since the virus is transmitted through saliva, a cat can catch rabies through even the smallest cut or scratch on her own body.

Once inside, rabies works swiftly, gathering strength and replicating in the muscle tissue before traveling through the nervous system to the brain, causing it to swell beyond the skull’s capacity to contain it. Such extreme inflammation and pressure bring about drastic physical and behavioral changes in the infected cat. The incubation period is rapid and symptoms can manifest themselves within a week to 10 days of infection. With furious rabies, a calm, mild mannered or friendly cat may suddenly become irritable and antagonistic. With paralytic rabies, a normally active and playful cat may start moving slowly or erratically and her lower jaw will hang open.

Owners of cats spending even the smallest amount of time outdoors – particularly in areas where there are stray cats, foxes, raccoons or skunks — should always check them for signs of a physical struggle, including scratches and bites.

Vaccinations against rabies are readily available, safe, effective, and relatively inexpensive. It is vitally important when adopting rescue kittens or cats to ensure their long-term protection against rabies by giving them a rabies vaccination as soon as possible, then scheduling them for periodic booster shots. As with any medical treatment, side effects are possible, but for the overwhelming majority of cats, the only consequences of a rabies shot are a few days of soreness or itching at the injection site. YOU can help stop rabies

Cats contracting rabies, whether furious or paralytic, frequently face untimely deaths. A deadly danger for centuries, there are, in fact, parts of the world that have been declared rabies free, and yet entire populations remain at risk. Why allow YOUR cats even a remote possibility of infection? Please join the World Rabies Day crusade and have your precious pets vaccinated.