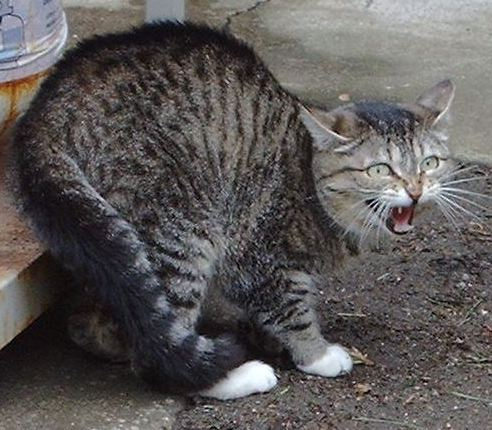 Although frightened felines may lash out at a person for a variety of reasons, there ARE advance warning signs before the actual attack: from widely opened eyes and dilated pupils, flattened ears and lashing tails to agitated meows, growls and snarls and hissing, even spitting. As to the WHY’S of this behavior, the following are the most common: ar Induced Aggression Timid cats may be fearful of almost everything: from perceived threats to sudden movements or sounds. Some may have suffered a traumatic incident in the past that will trigger their fear response now. This form of aggression is also their instinctive reaction to punishment, particularly physical punishment – a warning to frustrated feline fanciers to NEVER punish their pets as a way of changing any unacceptable behaviors. Redirected Aggression Whatever the original trigger, cats incapable of retaliating against the actual source of it (e.g. their instinct to hunt being thwarted by viewing a squirrel outside their window) may, instead, redirect their pent-up aggression at their owners, other cats or other pets in the household.

Pain Induced Aggression Cats in pain may also be confused and frightened, lashing out in their distress at anyone trying, with the best of intentions, to comfort them – particularly if their pain isn’t either obvious or visible.

Petting Induced Aggression Some cats have a time limit on being petted, going from purring to clawing or biting before their owners can say “ouch!” Whether due to their early socialization with people or their genetic disposition, they become over stimulated and feel threatened when stroked for too long.

Illness Induced Aggression Cats may become aggressive when they’re ill. Perceptive pet parents can “read” their kitties best, and any changes in behavior or any gradual or sudden onset of unprovoked violence should prompt a prompt consultation with their vet. Stress is quite often the cause of many cats’ behavioral problems — including aggression towards people — and is usually related to changes in their environment. While reactions vary from one cat to another, identifying the root of the problem and then either reducing or removing it may make all the difference in their topsy-turvy world and restore their kitty equilibrium. If, however, matters worsen, it’s essential for concerned cat guardians to consult a professional: an expert in cat behavior, preferably one recommended by their trusted vet. Working together, the vet may recommend drug therapy as a means of dealing with their aggressive cat (even when illness isn’t the issue), in conjunction with the behavioral treatment program designed by the behaviorist.