The Mystique of the Maneki Neko Cat 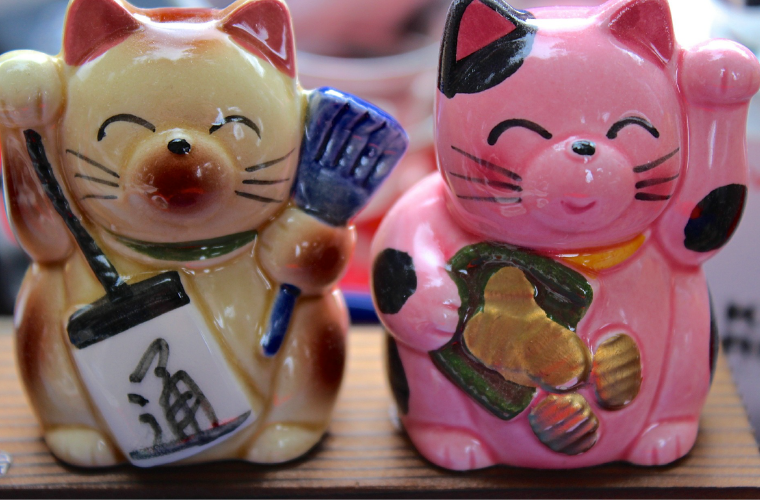 Throughout history, cats have not only been prized, worshiped, and treated as part of the family, but in countries like Japan, they have represented good luck for their owners.

Consider then, the Maneki Neko, a famed feline figurine, rich in background and folklore, that literally means, “beckoning cat.” Whether it’s called a charm or a talisman, referred to as the “welcoming cat”, “money cat”, “happy cat”, “fortune cat” or “Chinese lucky cat” (due to its popularity among Chinese merchants), it traditionally depicts a Calico Japanese Bobtail cat with an upright paw.

Whereas most scholars agree that the “beckoning cats” first appeared in Japan during the Edo period (17th to mid-19th century), the legends behind them are legion. The most popular one, however, asserts that a colony of cats lived near a monastery, but were never permitted inside. One day, the monks went to gather food, leaving one monk to guard the temple. When he himself came outside, he noticed a small cat sitting across the road. Although he called to the cat, the cat remained seated, raised a paw, and beckoned the monk over instead. At first, the monk hesitated, then ultimately crossed the road. No sooner had he reached the cat than the temple came crashing down. Thanks to that beckoning cat, his life was saved, and from then on, cats weren’t simply welcomed into the monastery, but were treasured and considered to be lucky. Today, ceramic statues of the Maneki Neko cat appear worldwide in various guises and garbs since they’re still thought to bring their owners good luck and fortune. Familiar sights in the windows of restaurants, stores, and other businesses, they’re used to attract customers and are usually depicted with a coin around their necks to invite prosperity. Other forms of neck decoration are a neckerchief or scarf, but the most common is a collar, bell and decorative bib (likely in imitation of those worn by cats in wealthy households during the Edo period). Thought to bring good health and happiness as well to one’s home, large statues of the “beckoning cat” will be placed in the entryway. As to the significance of the raised paw? If the left paw is raised, it’s supposed to attract customers to one’s place of business. If the right paw is raised, it’s meant to invite good fortune and money. If both paws are raised, it connotes protection. As for colors and color combinations? While the most traditional color combination, calico (white with orange and black spots) is considered the luckiest, other colors have their own significance. White denotes happiness, purity, and positive things to come. Gold represents wealth and prosperity. Black wards off evil spirits. Red signifies success in love and relationships. Green reputedly guarantees good health.

And yet, regardless of legend, raised paw or color, the most dedicated feline fancier will, undoubtedly, choose the purr of a living lap warmer over a representation of one every time.