The ABC’s of Cat Behavior 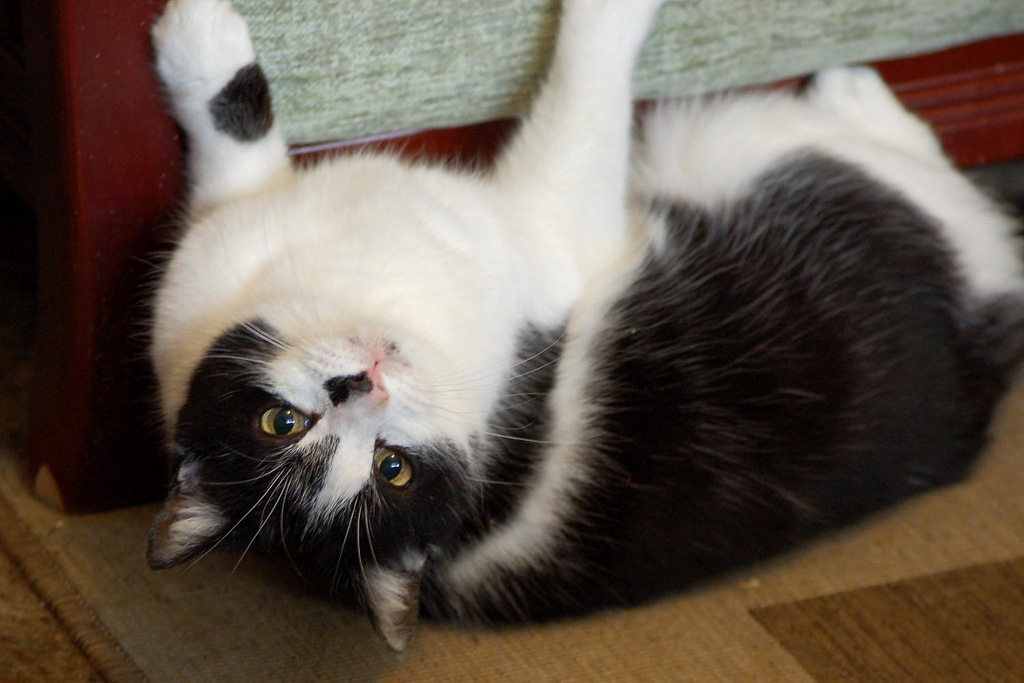 Whether their behaviors are amusing, bewitching and charming or aggressive, bothersome and cantankerous, living with cats is always adventurous, seldom boring and occasionally challenging.

Whatever cats do, they do it for a reason, THEIR reason, while humans come along for the ride: to watch, listen and learn. Listed below are some feline behaviors (some naughty, some nice) that may sound oh-so-familiar to you.

Kneading you with their paws.

When cats knead you as if you were dough, they are demonstrating their love for you (often accompanied by melting expressions, purring, even drooling), and returning instinctively to when, as kittens, they kneaded their mothers’ nipples to stimulate them into releasing the milk in order for them to suckle. Slowly blinking their eyes at you.

This usually signifies a state of supreme serenity and extreme contentment. Many feline guardians will respond by slowly blinking back, assuring the cats that they are loved, safe, and secure. The happy result? More often than not, they will close their eyes completely and luxuriate in a long, soothing nap.

Rubbing their heads against you.

Cats have special scent glands beneath the skin on their chin that release facial pheromones (often called “happy hormones”). By rubbing against you, they are “marking” you with their scent, affectionately claiming you as theirs, while showing that they, in turn, are in a loving, peaceful and contented mood.

Collecting and storing small objects in a safe place.

Certain breeds are more prone to this instinctive hunting and retrieving behavior. While some indoors cats will be satisfied chasing and catching feathered cat wands, some relish gathering up their own toys, string, or small items like their owners’ jewelry, and keeping them all together in a spot all their own.

Like humans, cats prefer fresh to stagnant water, and the very motion of water streaming from a faucet appeals to their sense of hearing, sight, and possibly smell. Even the cleanest water bowl (always use stainless steel) loses oxygen and begins collecting bacteria when left standing, if only for a few hours. Smart kitties! Being overly active at night.

Cats in the wild hunt at night, and inside cats who scamper about instead of sleeping haven’t been sufficiently “played out” during the day. The solution is a pre-bedtime ritual involving interactive toys such as wands, feather toys or Whirly Birds. If all else fails, a second feline companion can help yours burn off that excess energy.

Some cats are natural “chatters”, but if yours is suddenly vocal, there are reasons for it, including hunger, loneliness, litter box issues, environmental changes and pain. The first step is to see your vet, and if medical problems aren’t the cause, pay close attention to each potential source of the problem and ensure it’s resolved.

There are three ways to look at this. One: your cat is testing to ensure there’s a protective barrier between the world and them. Two: they’re literally trying to get closer to what they see, from caterpillars to cars. Three: they’re frustrated because that same barrier is blocking them from the many temptations outside.

This is another instinct from their days in the wild when chattering preceded their swift kill bite of small prey. The distinctive sound, which is often accompanied by a twitching or puffed up tail, may be caused for one of two reasons: your cat’s excitement at seeing potential prey or frustration at not being able to reach it.

Trying to bolt through an open door.

Once tempted by the sights, smells and sounds outside, they simply want more. To combat this, make the inside more appealing by installing cat trees, a hammock style bed near the window, leaving toys strewn about and the TV on when you’re gone. Or if possible, build a small, securely enclosed area outside your back door.

Pottying outside the litter box.

This behavior may mean something is amiss INSIDE the box. Perhaps your cat no longer likes the feel or smell of the litter or the type or location of the box. Perhaps your cat is ill or in pain or stressed by changes either in routine or in the environment. If your vet finds your cat healthy, address the litter box itself. Then, hopefully, once the cause is determined and the matter resolved, your cat will return to “business” as usual.

Sudden hissing while being petted.

You may think your cat’s enjoying every one of your pets, but a sudden hiss or even an attempt to scratch or bite you proves otherwise. Cats know their own limits, and although you assumed your stroking was a comfort, sometimes it’s an irritant. And when it is, hissing is your cat’s way of saying this particular session is over.

Attacking your ankles as you walk by.

This usually means a cat is bored. The solution is more stimulation in the form of cat furniture, scratching posts and climbing toys. Stuffy toys to drag about or place in a cat bed. Increased playtime with you. If this doesn’t solve the problem, another cat to wrestle, romp and run with can turn your cat’s boredom into satisfaction.